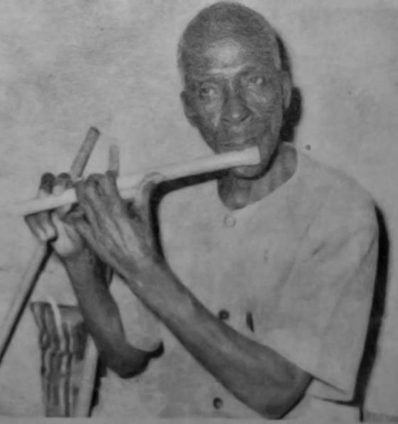 Ephraim Amu was a renowned music writer and a composer who was born on 13th September 1899 at Peki-Avetile in the Volta Region.

Amu composed several musical pieces, among them is ‘Yen Ara Asase Ni’ the nationally acclaimed patriotic song that is performed at national functions.

Amu is particularly known for his use of the ‘atenteben,’ a traditional Ghanaian bamboo flute; he promoted and popularised the instrument throughout the country, and composed music for it. His father was Stephen Amuyaa, a woodcarver who was popularly called Papa Stefano. His mother was Sarah Akoram Ama.

Ephraim Kɔku Amu was baptised by the Rev. Rudolf Mallet on October 22, 1899. Amu first went to school in May 1906 and at about age 12 he entered the Peki-Blengo E.P. Boarding Middle School, where he showed much interest and love for music and agriculture.

According to him, he enjoyed the music played during church collections when the music teacher, Mr Karl Theodore Ntem, played soul-moving renditions on the organ.

Amu and his music teacher struck a mutual agreement whereby Amu requested to be taught the skills of organ playing and in return, Mr Ntem asked him to work on his farm on Saturdays. In 1915, Amu passed the standard 7 School Leaving Certificate examination and also passed the Abetifi Teachers Seminary’s Examination.

In 1916 he and two other colleagues had to walk 150 miles from Peki to Abetifi with their boxes on their heads to start teacher training education.

His most famous song is Yen ara asaase ni (also known as Miade nyigba lolo la and Wo dientse wo shikpon ne) which has pretty much become a national song. There have been calls for it to be adapted as a national anthem as well.

He was given an honorary doctorate degree from the University of Ghana for his services and contribution to Ghanaian music. He was instrumental in the building of the school of music in Legon. He also led a group from the school in Legon to play at the Lincoln Center in New York where he received a standing ovation.

Dr Ephraim Kɔku Amu moved on to the next life on January 2, 1995. The death of the 96-year-old music veteran hit Ghana like a dark storm.

DISCLAIMER: The Views, Comments, Opinions, Contributions and Statements made by Readers and Contributors on this platform do not necessarily represent the views or policy of Multimedia Group Limited.
Tags:
Ephraim Amu
Yen Ara Asaase Ni