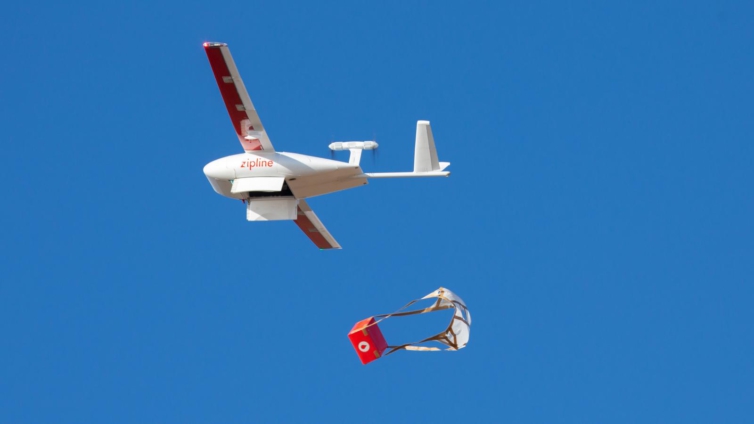 New York based TIME magazine has lauded Ghana’s use of drones in the fight against the novel coronavirus pandemic.

The weekly magazine reported on Wednesday how one the Zipline-manned drones was used to transport samples in a rural community in Ghana to the testing facility in Accra.

“Instead of driving the test swabs two hours to the capital, Accra, for analysis, [health authorities] had them dropped off at a health facility one district over. Within a few minutes, they were winging their way to a testing facility via autonomous drone,” the US-based magazine said.

“Two days later, the results came back via SMS: negative,” the report added.

The report noted that it is “the first time that autonomous drones have been used to make regular long-range deliveries into densely populated urban areas, and paves the way for drone technology to play a new role in the fight against Covid-19.”

Zipline also intends to use the technology in the US but TIME reports that the company is focused on the programme in Ghana.

“Using contactless drone delivery to transport Covid-19 test samples will allow the government to more quickly respond to the pandemic and help save lives,” Zipline CEO Keller Rinaudo is reported to have said.

Vice President Mahamudu Bawumia who launched the service in Ghana has since touted it. Describing it as the largest service on the continent.

Read the full report by TIME below

Drones are delivering COVID-19 19 tests in Ghana. Could the US be next?

Bismark Sarkodie had a situation on his hands. As the Municipal Director of Health Services for a rural district of Ghana, he had ordered an entire camp of 244 construction workers into quarantine when three of them tested positive for the novel coronavirus.

Two weeks later the camp residents were desperate to get out, but Sarkodie couldn’t release them until he was sure that every resident was clear, and that meant re-testing the original patients. But on April 17, instead of driving the test swabs two hours to the capital, Accra, for analysis, he had them dropped off at a health facility one district over. Within a few minutes, they were winging their way to a testing facility via autonomous drone.

Two days later, the results came back via SMS: negative. The workers could be let out of quarantine. On any other day, Sarkodie says, he might have marveled at the fact that Ghana is the first nation in the world to use drone technology to test for COVID-19; instead he was just relieved that his district was once again clear of the disease. “Testing is the most important thing, and whatever it takes to make it faster, makes it better,” he says.

It may not seem like much, but Ghana is shaving hours and even days off the time it takes to get a COVID-19 test from suspected rural victim to urban laboratory with the help of delivery drones that, up until last week, were primarily used for transporting vital medical supplies in the opposite direction. Now, Zipline, an American health care logistics company, is turning its service around, flying samples from difficult-to-reach rural areas into the capital with its fleet of red and white drones.

It’s the first time that autonomous drones have been used to make regular long-range deliveries into densely populated urban areas, and paves the way for drone technology to play a new role in the fight against COVID-19. The company eventually plans to put its technology into use in the U.S., but says it is focused right now on the program in Ghana, according to Zipline CEO Keller Rinaudo. “Using contactless drone delivery to transport COVID-19 test samples will allow the government to more quickly respond to the pandemic and help save lives.”

With nearly 70,000 tests conducted so far, Ghana has one of the highest testing rates in Africa. But unlike the United States, where swabs and the chemical reagent needed to complete the tests are in short supply, Ghana has a different kind of backlog: thousands of far-flung rural clinics, and only two places in the entire country where the swabs can be analysed. Until last week, all the tests had to be transported to the laboratories by road, a journey that can take up to six hours. Some remote clinics, loath to dispatch an ambulance for just one test, would wait a few days in order to collect enough samples to make the trip worthwhile, prolonging patients’ anxiety and delaying the contact tracing protocols necessary to stop the virus’s spread.

So far, Ghana has just over 1,000 confirmed cases. If that number is to stay low—and the country’s economy to remain open—the government will need to carry out robust contact tracing and strict isolation of suspected and confirmed cases, neither of which can be achieved without extensive testing. “Ghana’s problem isn’t the lack of tests,” Daniel Marfo, Zipline’s general manager in Ghana, tells TIME by telephone. “It’s the distribution that was the nightmare. The government wanted to ensure that testing would have the same level of confidence in rural areas as it does in the city. That’s where we come in.”

Once collected, either in local clinics or by health workers out in the field, the test swabs are packaged with ice in specially designed bio-safe containers, fitted with a parachute, and placed into the bellies of the drones. The zips, as they are called, won’t actually land at the laboratories. Instead they swoop down to release their payloads at designated drop zones, where attendants, alerted to the pending arrival via SMS, are waiting to collect them. The whole round-trip journey, which could take up most of a day by car, takes under 30 minutes.

Zipline’s fleet in Ghana is equipped to transport up to 15,000 tests a day, in 300 flights, from their two collection points — though Ghanaians are hoping demand will never reach that point. The company has two other drone ports that could be brought online as well, serving some 2,000 rural health clinics and between 10-15 million residents.

The company launched in Rwanda in 2016 as a service to deliver blood products and other vital medicines to rural clinics. They expanded into Ghana a year ago, where they transport some 200 different medical products, including vaccines, blood, plasma, personal protective equipment (PPE) and antivenins, to health facilities that otherwise would have to depend on long and perilous road journeys to obtain lifesaving medical supplies. Now all small-scale deliveries are done via drone, to minimize human contact and virus transmission.

Before the coronavirus outbreak, Zipline had planned to launch in the United States later this year. Now those plans have been accelerated, Rinaudo says, and the company is working with the Federal Aviation Authority to get the necessary approvals. But instead of delivering blood products and medicines as originally planned, Zipline will focus on distributing scarce resources such as test kits and PPE, just like it is doing in Ghana.

“We are out of everything.”

Further down the line it could start delivering routine medications as well, keeping vulnerable patients with chronic conditions away from hospitals where they risk exposure to the virus. In Rwanda, Zipline has started delivering chemotherapy drugs to rural patients stuck at home because of travel restrictions. For Marfo, the potential applications of the technology are a rare spark of hope in a dark time.

“Before COVID, we never even thought about delivering PPEs or tests,” Marfo says. “We never thought we would be able to fly into urban areas safely, and so quickly. Internally, we didn’t think we were ready, but the urgency of the situation has opened up a whole new way of seeing how drones can be put to work during this difficult time.”