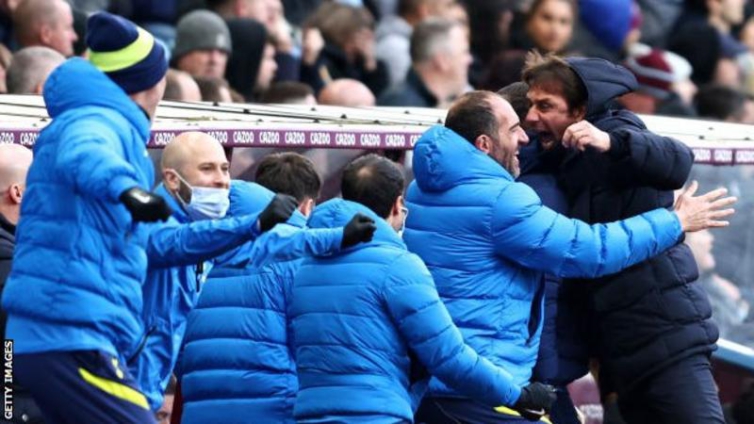 Antonio Conte, a Premier League winner with Chelsea, has seen his Tottenham side score nine goals in two matches

It is just over a week since Antonio Conte said it would be a “miracle” if his Tottenham team finished in the Premier League’s top four and qualified for the Champions League.

On 1 April Spurs were three points behind the Gunners, having played one game more and with an inferior goal difference.

But fast forward a week and Tottenham have thrashed Newcastle 5-1 and on Saturday won 4-0 at Aston Villa, while the Gunners have suffered back-to-back defeats – the surprising 3-0 loss at Crystal Palace on Monday and Saturday’s 2-1 home reverse to a Brighton side who had not won in their previous seven matches.

Since Conte’s remarks, another of their top-four rivals, Manchester United, have picked up one point from a possible six, drawing 1-1 with Leicester last week before losing 1-0 at Everton on Saturday.

Of their rivals for the final Champions League place, only West Ham have won since the Italian’s comments, beating Everton 2-1 last weekend. They travel to Brentford on Sunday.

The past week means Tottenham, five points adrift of the top four when Conte took charge in November, must now be favourites to secure Champions League qualification.

They are fourth and three points clear of their north London rivals with a significantly better goal difference, though the Gunners do have a game in hand.