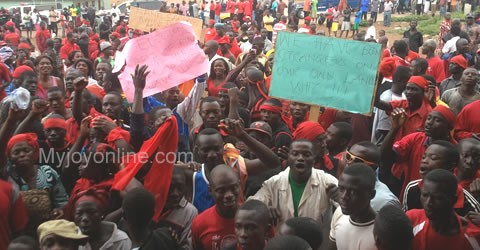 The Takoradi Polytechnic Chapter of the Polytechnic Teachers Association of Ghana (POTAG) Thursday began an indefinite sit–down strike to press home its demand for immediate migration onto the Single Spine Salary Structure (SSSS).

Addressing a news conference in Takoradi Thursday, Mr. Samuel Mensah, President of the Takoradi Polytechnic Chapter of POTAG, said it resolved to go on strike because the Fair Wages and Salary Commission (FWSC) had failed for more than two years to roll POTAG members onto the SSSS.

He said the FWSC had not shown enough commitment towards bridging the gap in respect of remuneration levels that exist between POTAG and other analogue institutions.

“It is evident that the Fair Wages and Salary Commission have persistently exercised feet-dragging posture and attitude towards the migration of POTAG members onto the Single Spine Salary Structure”, he said.

“Therefore, the Takoradi POTAG members have resolved not to change their position until they have been satisfactorily migrated onto the SSSS.”

Mr. Mensah said POTAG had not been able to negotiate or review its conditions of service since 2008, which had consequently affected the economic condition and morale of its members.

He said it was of interest to note that the polytechnic lecturer is paid a paltry amount of GHC15.00 as rent allowance while their counterpart at the university is paid GHc800.00.

Mr Mensah said the stagnation and erosion of the real value of their salaries since 2009 had compelled high caliber teaching staff to drift out of polytechnics to other institutions for better remuneration and working conditions.

Mr. Mensah said the recent discussions with the FWSC and the Ministry of Finance aimed at determining an appropriate market premium which would have resulted in the migration of its members onto the SSSS, stalled as FWSC indicated that it had exhausted its mandate for any further review of the market premium.

He said the attitude of FWSC and the Ministry supported the perception that polytechnic education that trained the middle work force needs of the nation was not a matter of utmost priority to the government.

He appealed to President John Evans Atta Mills to intervene to avoid the disruption of the current academic calendar of the Polytechnic to enable the final year students to complete their education.