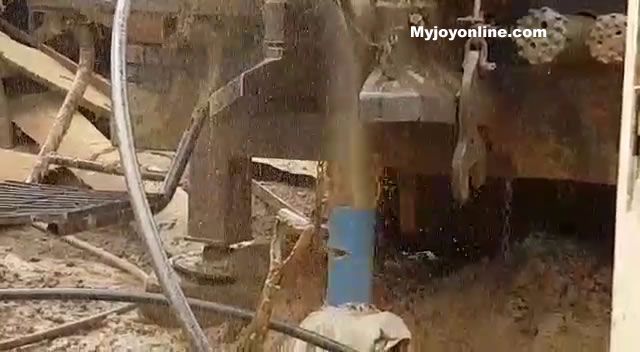 Water is life and it is one of the crucial elements needed by humans to survive.

Lack of it or a small loss of it can lead to dehydration, fatigue, nervousness, headaches, weaknesses and even dizziness.

Prisoners from across the country have experienced one or more of these because access to portable drinking water is an extremely scarce commodity in the prisons.

This issue was highlighted in JoyNews’ Seth Kwame Boateng’s documentary “Left-to-Rot” and it started receiving the currency it deserves.

The Left-to-Rot documentary brought to the fore the inhumane conditions under which prisoners in the country live and how their human rights have been constantly abused over the years.

It also looked at how the country has reinvented the long abolished ‘slave trade’ by forcing about 130 inmates sleep in a cell meant for at least five people.

As part of efforts to reverse this trend, Seth Kwame Boateng and the Multimedia Group Limited have started a crusade to get public support to help give the prisons a facelift and this is already yielding dividends.

A Turkish based foundation, Bentül Abla foundation is the first to come on board to help address the water challenges in the prisons. They have promised to provide mechanized boreholes for all prisons in the country.

To prove their commitment to this promise, the foundation has finished with the first mechanized borehole at the Kumasi Central Prisons. The €3500 water facility, according to the country’s operations representative of Bentül Abla foundation, Blali Gozey, will be replicated across the country and also explore other assistance they can offer prisons in the country.

Seth Kwame Boateng’s two major documentaries on the prisons, “Locked and Forgotten” and “Left-to-Rot” have not only received Presidential and judiciary attention but international recognition as well.

The “Left-to-Rot” documentary became a topical issue in the United States of America when it was screened at the Fordham Law School.

Law Professors from the University and other Universities, members of the Association of Ghanaian Lawyers in America, Ghanaian community in America and other dignitaries were present at the premiere.

Seth Kwame Boateng used the occasion to appeal to them to donate towards the Ghana Prison reformation process.

He was also interviewed on about seven different radio stations in the United States of America about the prison project and he got a number of people pledging to support it.

Medical outreach programs by US-based doctors in Ghana prisons, medical supplies and clothings are some of the many benefits the prisons will soon reap following Seth Kwame Boateng’s one month visit to the United States of America.

A number of corporate bodies and organizations have also indicated their readiness to adopt the prisons and give them the needed facelift.

Before his trip to the United States, Seth Kwame Boateng was invited by the President, John Dramani Mahama to the Flagstaff House for a discussion on his latest documentary on the prisons, ‘Left-to-Rot’.

The President expressed concern about the inhumane conditions in the prisons and assured Seth Kwame Boateng he will work hard to fix the problem.

As part of the strategy to deal with the massive congestion in the prisons, President Mahama told Seth Kwame Boateng a remand home is currently being built in the Nsawam prisons and has instructed that a similar one built in the Kumasi Central Prisons.

The Chief Justice of Ghana, Her Ladyship Georgina Wood has also intensified the Justice for All Programme since the release of that documentary.

Over 300 remand prisoners have had their freedom since Seth Kwame Boateng started the prison project. If you have anything to contribute towards this project, walk to the offices of Multimedia Group (Joy Fm, Asempa Fm, Adom Fm, Luv/Nhyria Fm) and present your donation. You can also call Seth Kwame Boateng on +233-243-149-169 or send a mail to seth.boateng@myjoyonline.com