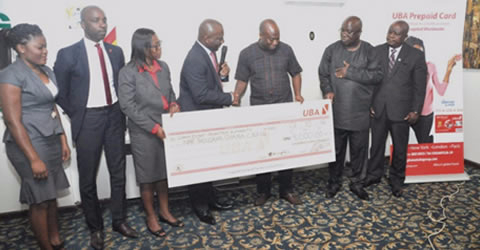 United Bank for Africa (UBA) has reaffirmed its commitment to promoting Ghanaian businesses by supporting the 24th National Awards for Exports Achievement for 2014.

The bank has presented a cheque of Ghs 9,000.00 to the Ghana Export Promotion Authority at the launch of this year’s award which seeks to recognize and reward exporters who have distinguished themselves in the past year.

Presenting the awards, the Deputy Managing Director of UBA, Mr. Usman Isiaka reiterated UBA’s commitment to promoting export and facilitating trade across Africa through its AFRITRADE service and AFRICARD product.

He indicated that, in addition to the cheque, ‘UBA will offer all fifteen winners free UBA prepaid cards with preloaded token amount on each card to facilitate their subsequent use as cash advance, travel advance and expense management cards both locally and internationally.

The Deputy Minister of Trade and Industry, Mr Ibrahim Murtala Muhammed who received the cheque on behalf of GEPA expressed his profound gratitude to UBA and commended the bank for this laudable initiative. He indicated that, government would have had to finance this event; but this support from UBA will go a long way to ease government’s financial burden. He then charged other corporate institutions to emulate UBA’s effort.

The awards ceremony has been slated for October 17, 2014 at the Banquet Hall of the State House.