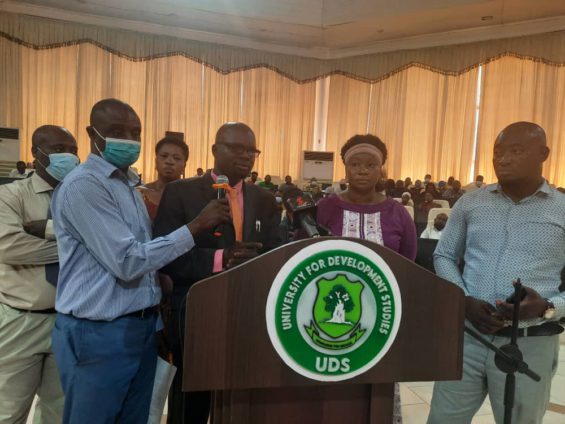 The Senior Staff Association of the University for Development Studies has suspended their intended strike action after management heeded their concerns.

The Union had threatened to begin strike action on November 20, 2021, following a disagreement on some conditions of service they had put before the university’s management.

The Union had said they were frustrated, dissatisfied, and displeased with the management system/guidelines in relation to Administrative or Professional Staff Promotion/Appointments, therefore the need for some reforms.

The Union had raised concerns over the university’s decision not to recognised first decree honours in third class or pass awarded by Accredited Universities in Ghana. Failure to recognise Masters of Business Administration, Masters of Science, and Master of Arts in related disciples.

The others included refusal and failure to promote upgrade or appoint senior staff who has acquired new certificate based on their rank/position or both.

The members had also raised concerns over the failure of the management to recognise distance, Sandwich and part-time certificates acquired/awarded to serving staff, and the institutionalisation of pre-examination conducted on servicing team even before the traditional established formal interview takes place.

Addressing a press conference on November 29, 2021, the National Chairman of the Association, Zakaria Mohammed, said there had been fruitful deliberations between the Union, management of UDS, and the Ghana Tertiary Education Commission culminating in prudent and pragmatic steps to resolve the issues.

He said the Union appreciates all the stakeholders’ relevant and meaningful contributions that pushed to avert the intended strike that would have started today.

Mr Zakaria said they believe that the fight for justice, equity, and the various agreements reached with the management will inure in the scheme of public university management principles.