Uganda confirms death of another medic from Ebola 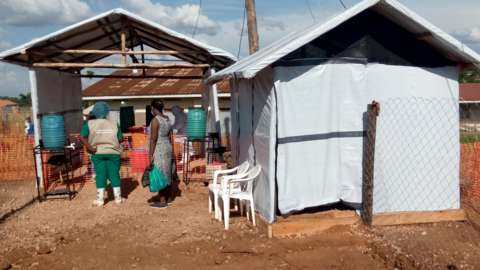 The Ugandan health ministry has confirmed the death of another health worker, an anaesthetic officer, who died in the early hours of Wednesday.

Margaret Nabisubi, 58, is the fourth medical worker to die of Ebola, according to Health Minister Jane Ruth Aceng.

I regret to announce the passing of another Health worker, Ms. Nabisubi Margaret, an anesthetic officer. The 58 year old succumbed to Ebola at 4.33am this morning at Fort Portal Hospital (JMedic) after battling the disease for 17 days.

A team of medics got exposed to the virus when they treated the first confirmed case, who needed surgery, and they have been admitted to Fort Portal regional hospital.

A Tanzanian medical student, who was part of the team, died at the weekend.

Separately, a health assistant in the district of Kagadi died of the virus too.

It is suspected that a midwife also died from Ebola.

Medical workers expressed concerns about not having enough personal protective gear in the first days of the outbreak.

Official figures show that there have been 43 confirmed cases since the outbreak was announced two weeks ago, and 10 of these have died.

Health officials said they have traced more than 800 people suspected to have come into contact with those who contracted the disease.

DISCLAIMER: The Views, Comments, Opinions, Contributions and Statements made by Readers and Contributors on this platform do not necessarily represent the views or policy of Multimedia Group Limited.
Tags:
Ebola virus
Health Worker
Uganda