A radio presenter in Uganda is to hold a mock ceremony to marry a friend on Friday – the catch is that guests have to pay to attend.

That is because the wedding is a stunt to raise money for Ugandan writer Lulu Jemimah to go to Oxford University.

Lulu, 32, hit the headlines recently when she "married herself" in a white dress.

She says, in her mind, it is preferable to further her education rather than settle down into married life.

Why did she marry herself?

"As young as 21 or 22, people start asking you when you are getting married," she told BBC Newsday. "For me there is so much more I want to do – like study for this degree.

She says her mother has often prayed for her to find a good husband, while her father went as far as drafting a speech for her future wedding when she was only 16.

Pressure to marry comes from outside the family too, she says.

"A lot of people told me: 'You are going to go abroad [but] what kind of man are you going to meet? Why don't you meet someone here then travel there?'"

So Ms Jemimah took matters into her own hands and made a statement, marrying herself in a wedding that cost just $1.50 (£2). 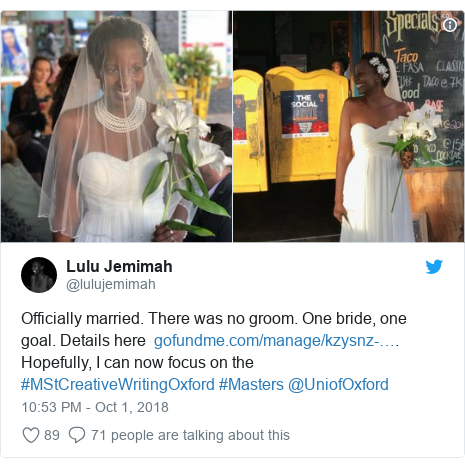 Ms Jemimah says she wanted to make a comment on the state of marriage, while also raising the $12,000 she needed to continue her studies in the absence of a scholarship or grant.

So why this second wedding?

News of the singleton's wedding prompted radio show host Siima K K Sabiti to joke with friend Bernard Mukasa that they should marry to get people off their backs too.

"When are you going to give your parents a wedding? That's the question that [often] comes along," Ms Sabiti told the BBC.

This led to plans for a massive wedding party, with tickets going towards Ms Jemimah's crowdfunding efforts to raise money for her Masters degree in creative writing at Oxford University in the UK. 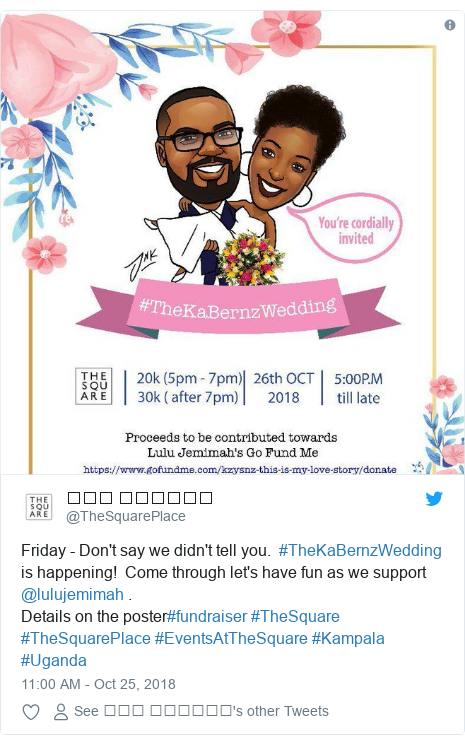 "We're hoping to make a difference – we're in a Uganda shilling economy, Lulu's got to raise her fees in pounds. I'm feeling positive that we can make some contribution to helping her finish her degree," Ms Sabiti told the BBC.

"Many more young women are not succumbing to the societal pressures. Many like Lulu are pursuing further education, or their careers, starting their own businesses before settling down," she added.

"It's happening slowly but more and more people are beginning to accept it."