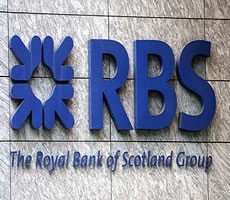 Moody’s said it now believed the UK government was less likely to support some firms if they got into trouble.

However, the firm emphasised that the downgrades did not “reflect a deterioration in the financial strength of the banking system”.

Shares in RBS and Lloyds fell sharply at the start of trading, but then recovered. By early morning RBS shares were down 0.25% while Lloyds was 1% lower.

In a statement, Moody’s said: “Moody’s Investors Service has today downgraded the senior debt and deposit ratings of 12 UK financial institutions and confirmed the ratings of one institution.

The downgrades include a two-notch cut for government-controlled RBS, and a one-notch cut for Lloyds TSB, a division of part-nationalised Lloyds Banking Group.

Spanish bank Santander had its UK business downgraded by one notch, while Nationwide Building Society suffered a two-notch reduction.

RBS said it was “disappointed” that Moody’s announcement did not reflect the “significant progress” the bank had made to restructure it finances.

“We do, however, see the removal of implicit government support for the UK banking sector as being a necessary and important step forward as the sector returns to standalone strength,” RBS said in a statement.

Lloyds said that it believed Moody’s was reflecting what was already understood in the market, and that it would “have minimal impact on our funding costs”.

Nationwide said that Moody’s announcement was part of an industry-wide review, and “not a reflection of Nationwide’s business model”.

The building society said in a statement: “Nationwide remains one of the strongest and best capitalised financial organisations in the UK”.

The Chancellor, George Osborne, said one reason for the downgrades was that the government was seen to be “trying to deal with the too-big-to-fail problem”.

He told the BBC: “One of the reasons they’re doing this is because they think the British government is actually moving in the direction of trying to get away from guaranteeing all the largest banks in Britain.

“People ask me how are you going to avoid Britain and the British taxpayer bailing out banks in the future? This government is taking steps to do that.

“Therefore credit rating agencies and others will say, well actually these banks have got to show they can pay their way in the world.”

Mr Osborne said he was confident that British banks were well-capitalised. “They are not experiencing the kinds of problems that some of the banks in the eurozone are experiencing at the moment.”
Over-reaction?

Banks with a “high likelihood of support” are RBS and Lloyds.

Banks or building societies with a “moderate or high likelihood of support” are Nationwide, Santander UK, Co-operative Bank, and Clydesdale Bank. Clydesdale’s rating was reaffirmed, not cut.

Institutions with a “low or no likelihood of support” included the following building societies: the Newcastle, Norwich & Peterborough, Nottingham, Principality, Skipton, West Bromwich and Yorkshire.

Analysts warned against over-reacting to the downgrades.

Max King, a portfolio manager at Investec Asset Management, said: “People are getting a little paranoid about the UK banking sector.

“It doesn’t have the same exposure to sovereign default and devaluation risk as the rest of Europe. It does have exposure to Ireland, but that is a eurozone country which appears to be doing best in the crisis,” he said.

And Ralph Silva, banking analyst at SRN, said the downgrades were “an over-reaction”, but he added that the government will probably have to provide further support for RBS by the end of the year.

“The key driver for the downgrades of most banks’ debt and deposit ratings is Moody’s assessment of the deterioration of their unsupported financial strength,” said the ratings agency.

Moody’s said it expected a further deterioration of the banks’ domestic asset quality due to a weak economic growth outlook and government austerity measures, and liquidity strains due to a lack of access to wholesale funding.

The firm said if recapitalisation and deleveraging plans for the banks were successful they would help to restore confidence in them.

“However, Moody’s believes that these plans face significant implementation risks,” it said.