The British politician of Ghanaian descent, Samuel Phillip Gyimah, has announced his bid to take over from Prime Minister Theresa May.

The 42-year-old former Universities Minister is the first contender trying to succeed Theresa May by backing a referendum on any Brexit deal.

Sam Gyimah has become the thirteenth candidate to join the race for the Conservative Party leadership, the BBC reported Sunday, June 2.

The Tory MP said he supported another vote between the PM's deal, a no-deal exit and remaining in the EU.

He said that he would vote ‘Remain’ in such a poll, but wouldn't "actively campaign" for it.

Announcing his candidacy on Sky's Sophy Ridge programme, Mr. Gyimah said he was putting himself forward to "broaden the race".

The East Surrey MP said the wide range of views on Brexit among the public was "not being reflected in the contest at the moment".

He added: "There's a wide range of candidates out there, but there's only a narrow set of views on Brexit being discussed."

Mr. Gyimah quit the government last December over Mrs. May's Brexit plan, saying that he intended to vote against the deal and advocate another referendum.

"What most of the candidates are offering is to offer no-deal and a fudge on Theresa May's deal which has been heavily defeated," he said.

The MP said offering a "final say on the Brexit deal" would "bring the country together".

Who is Sam Gyimah?

Sam Gyimah was born on August 10, 1976, in Beaconsfield, Buckinghamshire. When he was six years old, his parents split up and his mother returned to her native Ghana with Gyimah and his younger brother and sister while his father remained in the UK.

For the next ten years, Gyimah attended Achimota School in Accra, Ghana after which he returned to the UK to sit GCSEs and A-levels at Freman College, a state school in Buntingford, Hertfordshire. He then went on to Somerville College at the University of Oxford, where he read Politics, Philosophy and Economics, and was elected President of the Oxford Union.

On graduation, Gyimah joined Goldman Sachs as an investment banker, leaving the company in 2003 to set up Clearstone Training and Recruitment Limited with fellow future Conservative MP Chris Philp. Clearstone and its subsidiaries went into administration in 2007. In September 2005 Gyimah edited a report by the Bow Group, a Conservative think tank, entitled From the Ashes: the future of the Conservative Party. He was subsequently elected chairman of the Bow Group from 2006 to 2007.

He has served as the Member of Parliament (MP) for East Surrey since the 2010 general election.

Between 2014 and 2018 after serving as Parliamentary Private Secretary to Prime Minister David Cameron and a government whip, Gyimah was promoted to holding between one and two positions concurrently of Parliamentary Under-Secretary of State.

He served as the Minister for Universities, Science, Research and Innovation from January 2018 until he resigned on November 30, 2018.

Gyimah has been married to Dr Nicky Black since 2012, with whom he has a son and a daughter.

Who will replace Theresa May? 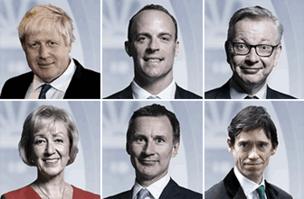 The winner of the contest to lead the Conservative Party will become the next prime minister.