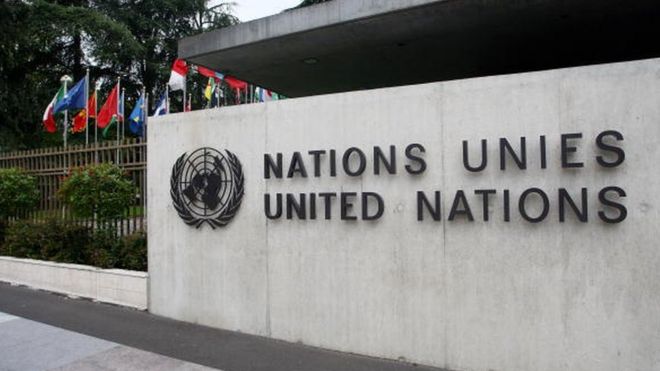 The United Nations says it is “shocked and deeply disturbed” by footage of an apparent sex act in one of its official cars in Israel.

The clip shows a woman in a red dress straddling a man in the back seat of a white 4×4 with UN markings.

The video, shared widely on social media, was apparently filmed on a main street by Tel Aviv’s seafront.

The UN said it was investigating the incident and was close to identifying the individuals seen in the video.

Those involved are believed to be staff members of a peacekeeping organisation in Israel, the UN said.

Another passenger can be seen slumped in the front, but the driver can’t be seen as the car moves away.

Stéphane Dujarric, the spokesman for the UN’s Secretary General, António Guterres, described the behaviour seen in the 18-second video as “abhorrent”.

That kind of behaviour “goes against everything we stand for and having been working to achieve in terms of fighting misconduct by UN staff”, Mr Dujarric told the BBC on Friday.

When asked if the apparent sex act was consensual or involved payment, Mr Dujarric said those questions were part of the ongoing investigation.

The UN has strict policies against sexual misconduct by its staff members.

Staff may be disciplined if they are found to be in breach of conduct rules. They may be repatriated or banned from UN peacekeeping operations, but it is the responsibility of their home nation to take further disciplinary or legal action.

The UN has long been under scrutiny over allegations of sexual misconduct by its peacekeepers and other staff. There have been frequent allegations in recent years.

Secretary General Guterres has pledged to take a “zero-tolerance” approach to sexual misconduct with the UN’s ranks.

What did the UN spokesman say about the video?

“We are shocked and deeply disturbed by what is seen on this video,” Mr Dujarric said.

He said an investigation led by the UN’s Office of Internal Oversight Services was “moving very quickly”.

Based on buildings visible in the video, the footage appears to have been captured on HaYarkon Street, a usually busy area parallel to the promenade.

“We expect the process to be concluded very quickly and intend to promptly take the appropriate action,” Mr Dujarric said.

Mr Dujarric said the individuals involved were probably assigned to the United Nations Truce Supervision Organisation (UNTSO), which has served in the region since 1948.

What is the UN’s track record on sexual misconduct?

Heather Barr, co-director of Human Rights Watch’s women’s rights division, said she was “not surprised” by the video from Israel.

Ms Barr, who worked for the UN in Burundi and Afghanistan, said it was “good they’re investigating it”, but added that the UN “has a bigger problem than this one video”.

“That problem is about allegations of sexual exploitation and abuse committed by staff members of the UN,” Ms Barr said.

In 2019, there were 175 allegations of sexual exploitation and abuse against UN staff members, a report said. Of those allegations, 16 were substantiated, 15 were unsubstantiated and all others were still being investigated.