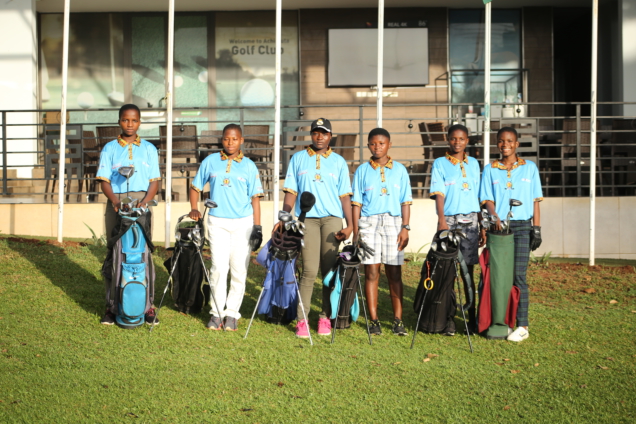 The Achimota Golf Club was the centre of attraction to more than a hundred golf-playing kids from across the country for the Junior Golf Championship.

The two-day event (28th and 29th April) was enough to showcase the budding golf talents and the potential for the future golf in Ghana.

Six (6) teenage golfers under the Captain One Golf Society Kids Project made a lasting impression in this year’s championship put together by the Ghana Golf Association (GGA) held in Accra.

It was the first time the young lady golfers will travel from their base in Kumasi to participate in a major competition.

The girls played six holes on the Achimota Golf Course.

President of the Ghana Golf Association, Mike Kweku Aggrey at the end of the event was positive the future of golf in Ghana was very bright in the wake of the plethora of talent displayed in the competition.

The girls from the Safe-Child Advocacy, have been playing the game of golf for less than a year – being trained by two professionals – Yaw Barima Okyere and Maxwell Owusu – of the Kumasi Royal Golf Club.

They are part of the Captain One Golf Society (C1GS) Kids Project that trains the less privileged kids from the society in the game of golf as an important tool to empower them.

Director for Safe-Child Advocacy, Rev Sister Olivia Umoh, who joined the ladies in Accra, was excited about the improvement of the girls within that short period.

Started in 2021, the girls would create a lasting impression in the minds of both amateur and professional golfers during the two-day event held at the Achimota Golf Club.

Though, none of them won any category of the competition, their exhibition of the skills learnt over the short period which translated into the quest to win on the day, impressed the many that were in attendant.

Founder and President of C1GS, Pius Ayeh Appiah, after the championship, encouraged the young golfers to keep training hard to get better in their next championship.

He also motivated the other players who couldn’t make it to the championship to pick-up lessons and tap into the experiences from their colleagues and upgrade their games.

Lessons learnt
The young golfers, though couldn’t win any trophy on the day, rather won the hearts of both the many professional and amateur golfers that were in attendant.

It was evident they exhibited great competitive spirit and exuded real professional traits at that young level of their game.

Carrying their golf bags, the girls learnt how to balance and take responsibility for their own actions from the plays they made.

Occasionally, sharing notes and writing down their strokes on the record cards, they learnt how to work in teams, be honest and seeing a competitor as a colleague and friend.

“…the competition has taught us to have confidence in ourselves that we can play with anybody anywhere and play well”, one said.