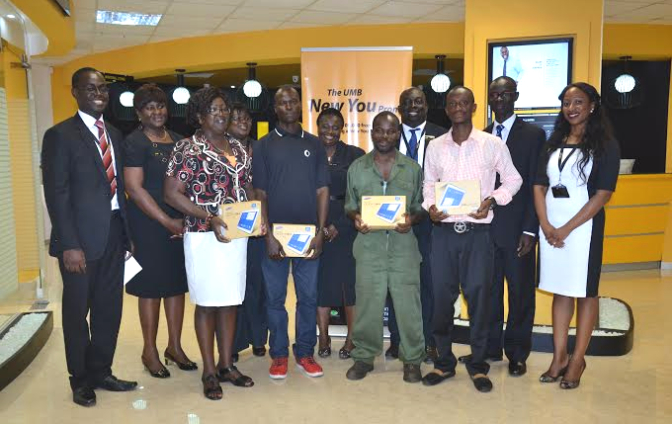 Universal Merchant Bank (UMB), held its first monthly draw in the UMB New You promotion at a colourful ceremony in Kumasi where ten (10) lucky customers were rewarded with Samsung Galaxy Tabs.

Speaking at the event, the Chief Operating Officer of UMB, Mr. Stephen Antwi-Asimeng, reiterated the commitment of UMB to always put the interests of their customers first and encouraged both existing and potential customers of UMB to actively participate in the promotion. As part of its corporate social investment mandate, Mr. Antwi-Asimeng also highlighted that in connection with the New You promo, UMB will be making a monetary donation to a charity that supports education in Ghana.

The grand prize of the New You promotion is GHC100,000, with the second prize winner driving home a Hyundai ix35.  Other prizes include Samsung Galaxy Tabs and UMB branded items.

Recapping the mechanics of the promotion, the Director of Retail of UMB, Mr. Lawrence Appiah-Baiden, stated that customers who open new current and savings accounts are given fifty (50) points.  Mr. Appiah-Baiden further noted that existing customers automatically received 50 points at the beginning of the promotion.  He also explained that with each deposit of a multiple of GHC 200, customers earn an extra five (5) points. To qualify for the monthly draws and the grand draw, customers must have accumulated at least 75 points and a minimum balance of GHC1000 during the promo.

Oheneba Owusu Afriyie IV, recounted the long and illustrious history of UMB and its special relationship with Asanteman and encouraged the bank to consistently put their customers first as they have always done. He also lauded the bank for the New You promotion initiative to encourage Ghanaians to save, which also helps them to achieve a better version of themselves.

The Samsung Galaxy Tabs were presented to the lucky 10 winners at presentation ceremonies at various UMB Branches across Ghana, including a ceremony held in the soon to open Airport City Branch of UMB.