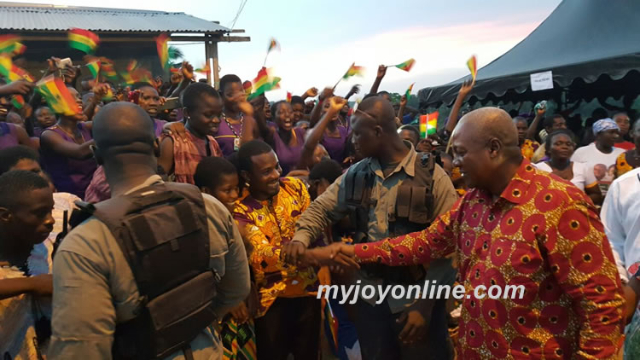 President John Dramani Mahama has embarked on an incredible commissioning spree in the Central region where he is set to commission six completed projects.

As part of his campaign tour of the region, the President commissioned a modern Kotokuraba market replacing a rickety structure that had been prone to fire outbreaks.

The market has existed for years, and was a major trading site during pre-independence era which continued to grow to its present size. It served as a major point for all trade in the region. Its position made it a hotspot for economic activity, as major activities in the city went on in and around the area.

The name of the market, which could mean 'crab village', is believed to derive from early settlers who made their living from the abundance of crabs in the bay.

Like many big markets in Ghana, most destruction to the Kotokoraba market has been through fires.Two major fires have razed parts of the market since 2000. In 2002 fire gutted the market, destroying goods worth thousands of cedis.

Speaking at the commissioning, President Mahama paid tribute to his predecessor the late President John Evans Atta Mills for laying the groundwork for the project before his demise in 2012.

"I am extremely delighted to be here in Cape Coast to inaugurate one of the most important project that is not only dear to my heart but was also dear to the heart of my mentor and comrade Prof. John Evans Atta Mills of blessed memory" he said.

President Mahama's voice was hoarse as a packed cris-crossing of regions to campaign appears to be having a toll on him.

Trailed by Central regional NDC officials and some government ministers the president is heading towards Assin Juabeng where Assin Juabeng where he is feasting with children in that community as part of his 58th birthday. It is not the first time that he has been here to celebrate with the children on his birthday.

There was a huge durbar at Gomoa Gyaman where the President commissioned a Community Day school.

President John Mahama in an affectionate embrace with a chief

Central region is receiving 14 of the 123 high schools. That is according to Deputy Education minister Samuel Okudzeto-Ablakwa who spoke on behalf of the President.This is the 26th school government is commissioning. In all 57 of the schools are ready.

With the sun setting, the President moved over to Bawjiase to commission another school.

The President is billed to commission Ofaakor Community Day SHS and the first phase of the Kasoa interchange.

Even before the commissioning of the interchange, scores of party supporters in the area have been waiting for the President.