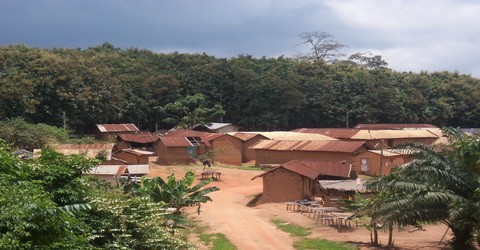 Residents of Montesua in the Sekyere South District of the Ashanti Region are under siege by strange and stinging flies which cause skin infection and other diseases.

Victims including children are also diagnosed of anaemia when they visit the hospital to receive treatment for the insect stings.

The people appear helpless; though they suspect a teak plantation surrounding the community could be a breeding ground for the strange insects.

Montesua, with a population of about 500 people is about a 30-minute drive from the district capital, Agona.

Two natural lakes, Akokosu on the North and Asuo Sika on the South, together with large teak plantations provide a cool and serene environment for residents.

The small yellowish insects attack and suck their victim’s blood and leave traces on the spot they sting. The itchy spot leaves the victim scratching the body vigorously, resulting in spontaneous rashes.

Residents say they have endured the situation for about three years now, with the rainy season being the worst times.

They however believe this year has been unprecedented and most terrible.

Secretary of the local Unit Committee, Kwame Kuruagu Boateng, told Nhyira FM the only intervention now is for residents to wear long-sleeved clothes at all times.

“Everyone here wears long-sleeve clothes in the morning to avoid insect bite. Sometimes you don’t see them, you only feel the sting.
Then the spot begins to swell, just as happens when a bee stings.
Just look at my arms, see how my body is reacting to a sting I suffered a short while ago?

“Look at how the woman is scratching her body”, he said as he pointed his fingers to a middle-aged woman. Yes, that is the difficulty we are going through here” he lamented.”

Out of frustration, Mr. Boateng wondered when the poor farming community will find a solution to the predicament.

“We don’t have money to have the community fumigated. It’s very devastating,” he said.

A 52-year old caterer of the School Feeding Programme, Grace Opoku said her five-year old grandson spent days at the hospital after staying at Montesua for a month.

She was in the community to serve lunch for pupils of the local Primary School and she was intensely scratching her body because she itched from the the insect bites.

“I have just been bitten by the insects. The instant effects are the rashes you see here”, she said.

“I have no option but to scratch the affected areas. The itching is so intense, but the moment I stop scratching, I feel pains in my body”.

“Even my grandson suffered similarly and was hospitalised. He was given three units of blood. We don’t have any idea about how to tackle this problem.”