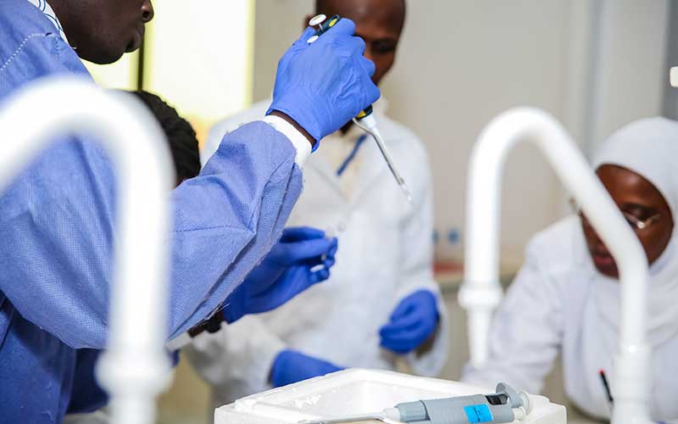 Research scientists from the West African Centre for Cell Biology of Infectious Pathogens (WACCBIP), University of Ghana are co-authors of the latest research paper on the SARS-CoV-2 pandemic in Africa published in one of the most prestigious global high-impact journals.

The paper titled, “A year of genomic surveillance reveals how the SARS-CoV-2 pandemic unfolded in Africa”, was accepted for immediate publication and subsequently published in Science, the American Association for the
Advancement of Science (AAAS) Journal on Thursday September 09, 2021, at exactly 2pm US ET.

Other Ghanaian scientists who contributed to the work were from the University of Allied Health Sciences (UHAS).

WACCBIP contributed significant sequencing data to the paper, which describes the genomic distribution, patterns and possible control of SARS-CoV-2 using a dataset of 8746 genomes from 33 African countries and two overseas territories.

The study shows that the epidemics in most countries were initiated by importations mainly from Europe; and diminished following the early introduction of international travel restrictions.

As the pandemic progressed, however, ongoing transmissions in many countries and an increase in mobility resulted in the emergence and spread of many variants of concern such as Alpha (B.1.1.7), Beta (B.1.351) and Eta (B.1.525).

It also differentiates between variants which originated and spread among African countries from those that were primarily imported from European countries.

This work is important because it was the first such multi-country, and multi-centre study in Africa. It demonstrates the strength of African scientists working together. The collaboration that resulted from this is still ongoing. The scientists meet weekly online for workshops and scientific discussions in a forum called the African COVID-19 Genomics Meeting.

WACCBIPS contribution to this work was funded by the Wellcome/African Academy of Sciences Developing Excellence in Leadership Training and Science (DELTAS) grant; the National Institute of Health Research (NIHR) grants using UK aid from the UK Government for a global health research group for Genomic surveillance of malaria in West Africa Wellcome Sanger Institute, UK) and global research unit for Tackling Infections to Benefit Africa (TIBA partnership, University of Edinburgh), and the World Bank African Centres of Excellence grant.

Dr. Bediako and Dr. Quashie are supported by fellowships from the Crick African Network (CAN).