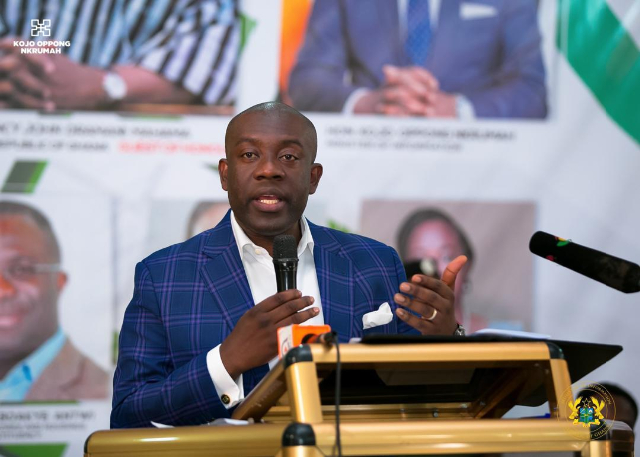 The Minister for Information Kojo Oppong Nkrumah says President Akuffo-Addo does not flip flop on his commitment to education and youth empowerment.

According to Mr. Nkrumah, President Akufo-Addo’s commitment to the Ghanaian youth remains unchanged

Mr. Nkrumah said it was factual that the New Patriotic Party (NPP) tradition had led in introducing sustainable interventions and programs that are aimed at supporting young people and education specifically.

The Minister who is also the MP for Ofoase-Ayirebi in the Eastern Region, was addressing the 27th Annual Residential and delegate’s summit of the Ghana National Union of Technical Students in Kumasi.

“Very often you will find that it is the NPP tradition that leads in interventions and programs that are aimed at supporting young people and education specifically. The [John] Kufuor Administration under the NPP introduced the Capitation grants, school feeding program and the extension of the senior high school program from three to four years while introducing model schools for more intakes,” he said.

He said the trend has been continued by the Akufo-Addo administration under the NPP with the introduction of the Free SHS which gives every Ghanaian child a right to attend secondary education for free whether rich or poor.

He added that it was the belief of government that Technical and Vocational Education & Training (TVET) was a major pillar for development hence the need to expand technical and vocational opportunities at both secondary and tertiary levels and thereby strengthen the linkages between education and industry, as well as give opportunities to the young ones, to deploy their skills, to employ themselves and others.

He said “government is also undertaking structural reforms by setting up a TVET Service, and TVET Council, and dedicating a whole division of the education service to Technical and Vocational Education, which would have its own Director-General.”

“The Ministry of Education has also been restructured, dedicating one Deputy Minister entirely to technical and vocational education,” Mr. Nkrumah added.

Mr. Nkrumah disclosed that the government’s One District One Factory project, another flagship policy during the 2016 election, is meant to launch Ghana as a major hub for industrialisation; but the government believes this game-changer remains meaningless if it is not supported by institutions that are primed to instill the relevant human resource skills that will sustain and grow the industries.

TVET, through the delivery of practical, middle-level skilled manpower, is therefore key not only to addressing Ghana’s employment challenges, but also its industrial agenda.