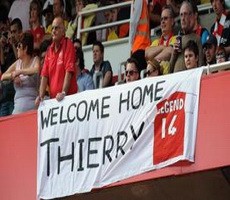 Manager Arsene Wenger has confirmed Thierry Henry will sign a two-month deal to return to Arsenal if insurance agreements can be worked out with New York Red Bulls.

Henry has been training with Arsenal in the MLS off-season and is not required to return to the United States until March.

Wenger said: “For two months it certainly will happen. I don’t take care of the agreement and the insurance and that is not completed. At the moment we cannot announce anything because all the paperwork is not done.”

He added: “To cover for two months is ideal. He has the experience and the quality. He knows the club and can help the players on and off the pitch. He has exceptional talent and is a very intelligent man, it can only be positive.”

Henry could feature in seven Premier League games, including key encounters against Manchester United and Tottenham, as well as FA Cup ties and the first leg of Arsenal’s Champions League last-16 clash against AC Milan.

If agreement is reached with Red Bulls he could start his second Arsenal spell in the FA Cup third-round tie against Leeds on January 9 after impressing Wenger with his sharpness during training.

Henry, meanwhile, has clearly felt at home back in London and was moved to tears when a statue of him was unveiled at the Emirates Stadium this month, along with those of fellow Gunners legends Tony Adams and Herbert Chapman.

Wenger added: “He is very happy and very modest about it. It was my idea and he was happy with the idea.”

Henry scored 226 times in 370 appearances for the club before moving to Barcelona in June 2007.

And former Arsenal defender Nigel Winterburn believes the return of Henry to the Emirates could provide a huge lift to the club.

Winterburn told Sky Sports News: “I hope everything works out as everyone is expecting. It’s terrific news for supporters of Arsenal.”

He added: “Thierry Henry is a winner. If he can make that rub off on players around him it can only be good for them. I hope everything fits into place.”

Despite his enthusiasm to see the Frenchman back in Arsenal colours, Winterburn admitted Henry’s return would be something of a gamble.

He said: “If it works out well it will be a terrific move by Arsene Wenger, but on the flipside if it doesn’t work out well people will say ‘why didn’t he go out and get a world-class current striker?’

“Will he play in that central role and maybe Robin van Persie move out to the left? Van Persie is the top man at Arsenal at this time. There are a lot of questions to answer but Arsenal would be delighted to have him back for this short time.”