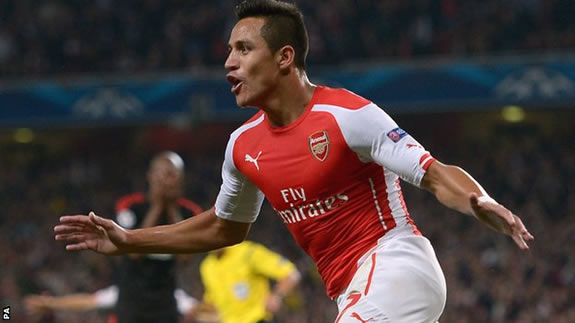 Having ruled out Hector Bellerin for four weeks and Santi Cazorla for the immediate future, Arsene Wenger promised to take no risks on the fitness of Alexis Sanchez.

Wenger will consult Sanchez on Friday when he returns from South America having defied a hamstring problem to help Chile beat Uruguay.

Arsenal want him fit to face Manchester United in Saturday’s lunchtime kick-off but, this time last year, Sanchez pushed similar warnings aside until he pulled a hamstring and was out for two months.

‘It’s a difficult one because I’m sure he’ll come back saying he’s all right, he’s always OK,’ said Wenger. ‘I don’t know how bad the injury was. You have to trust the medical people from Chile.

‘After that, it is a difficult period in November because it’s the first time when some of the players have played many games.

‘It’s a decisive period in the Champions League because it’s game number five and in the Premier League the first decisive games are also coming up.

Sanchez missed Chile’s goalless draw against Colombia last week but had recovered to start against Uruguay on Tuesday, scoring twice as his team came back from a goal down to win 3-1 win and boost their hopes of World Cup qualification.

‘I have watched the goals and he looked very sharp,’ said Wenger, who will examine a tape of the game before making a decision on 27-year-old Sanchez, who has been playing as Arsenal’s centre-forward this season, scoring eight goals.

‘For the first goal he ran from the half-way line and resists (challenges) and if you are really injured with a hamstring you cannot do that. He came off after 84 minutes and texted us to tell us he was in good shape after the game.

Injuries which crippled Wenger’s team last autumn included Cazorla who hurt a knee at Norwich, the same game in which Sanchez pulled a hamstring, before suffering an achilles injury as he returned to fitness.

The Spanish midfielder has been out for a month with further achilles trouble and is yet to return to training.

Bellerin damaged an ankle in the final seconds of the derby against Tottenham when caught late by Danny Rose.

‘It was a bad one,’ said Wenger. ‘Did Rose want to injure Bellerin? I don’t think so, he just went in for the tackle. It was the last 10 seconds and it’s annoying to lose him, for sure.’

Bellerin reported for duty with Spain’s Under 21s but found it too painful to train. A scan revealed an heavy impact injury and he returned to Arsenal. He will target a return against Manchester City next month.

His absence could mean another chance for Carl Jenkinson. Wenger ruled out the idea of moving centre-half Shkodran Mustafi to right-back but another option is Gabriel Paulista.

Bellerin, meanwhile, is close to signing a new contract at Arsenal which will disappoint Barcelona and Manchester City.

‘We are working on that and we are not far away,’ said Wenger.