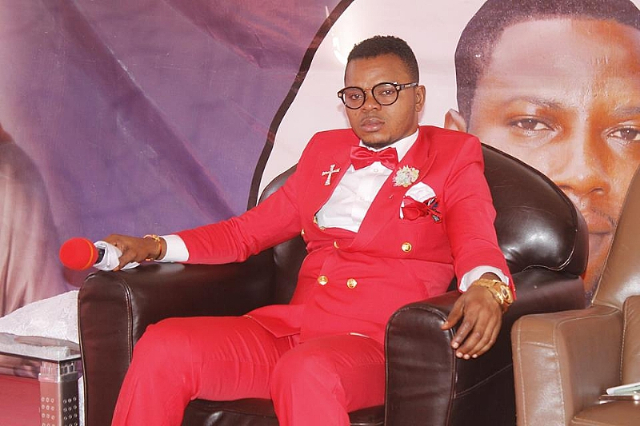 You don’t have to be well-versed in the Bible to know this self-styled ‘Bishop’ is a false prophet; so why the heck is he allowed to operate freely and with such audacity… and for so long?

The day I got on the same flight with ‘Bishop’ Daniel Obinim, O how I prayed! Neither the huge, blazing white 4×4 he was chauffeured to the Kumasi airport in nor his skimpy suit impressed me. His obviously bleached countenance was striking yet not even that occupied my mind like this doomsday thought: “is today the day?”

In the first place, I was wondering why on earth this Founder and General Overseer of International God’s Way Church did not just turn into a bird and make the short 45-minute flight to Accra since he claims he has the ability to turn into other creatures.

Apparently he can turn into a lion, dog or snake and bite people to death on spiritual visits or siphon money from people and places (banks beware!). Perhaps he hasn’t upgraded to the avian realm yet—I don’t know and I don’t care—but clearly the ‘Bishop’ needed a lift that day. But why today of all days?

You don’t have to be well-versed in the Bible to know this ‘Bishop’ is a false prophet. Don’t let the things money or marketing can buy fool you. “The Spirit clearly says that in later times some will abandon the faith and follow deceiving spirits and things taught by demons. Such teachings come through hypocritical liars, whose consciences have been seared as with a hot iron.” (1 Timothy 4:1-2, emphasis mine)

Jesus Christ shows us the way to tell who’s true and whose not. First He warns us: “Watch out for false prophets. They come to you in sheep’s clothing, but inwardly they are ferocious wolves.” (Matthew 7:15) Then he gives us the litmus test twice in a space of five verses: “By their fruit you will recognize them. (vs. 16 and 20)

Doctrine is important in telling who’s a real ‘man of God’ and who isn’t but ultimate test is fruit—their character and consequence of their lives. Things like their speech seasoned with salt, their love, patience, goodness, faithfulness, gentleness, self-control.

Let me not go into the litany of Obinim’s character issues, from slander to sex. By the way, according to him, his adultery with one of his junior pastors’ wife was meant to be a sign to his followers that he is human and not as divine as perceived by them.

Forget the miracles. Not all miracles are done by the Spirit of the Living God. Ask Moses and he’ll tell you about Jannes and Jambres, the famous magicians of Pharoah. “Aaron threw his staff down in front of Pharaoh and his officials, and it became a snake.

Pharaoh then summoned wise men and sorcerers, and the Egyptian magicians also did the same things by their secret arts: Each one threw down his staff and it became a snake. But Aaron’s staff swallowed up their staffs.” (Exodus 7:10-12). Later, these same sorcerers duplicated the changing of water into blood (7:22) and the production of frogs (8:7). However, the sorcerers were powerless to duplicate the other plagues (8:19).

You may recall that God gave Pharaoh and his magicians—and indeed all of Egypt—a very long rope. They had nine opportunities (you may call them ‘plagues’) to change their minds and their ways. Eventually by the tenth they did—but only when it was rather late. So much and so many had already been destroyed.

Feeling so annoyed and vindictive that July afternoon I was wondering: is today the day God is finally going to finish off Obinim? Would he have come to the end of the rope by the end of this runway? Oh, and my prayer was not so much for him but for me—that this wasn’t the day, time or the means by which God was going to bring Daniel Obinim to book because I would end up as “collateral damage.”

The God who is weak and slow

So why hasn’t God killed Obinim…yet? First, for God’s sake. I’ve learnt a cardinal lesson from searching the scriptures this year that has shocked me, to say the least. It hasn’t been so much the fact that God wants His glory to be seen among all peoples, for his fame and name to be spread to all nations and throughout all generations per se.

What I’ve found shocking is what He wants most to be known for—something my judgmental and vindictive self considers rather weak and unimpressive!

In Exodus 33:18-34:8, God told Moses He would proclaim His “name” before him. Then He proceeds to list some phrases or ideas (especially Exodus 34:6-7) which reveal that for which God wants to be “famous”:

“The compassionate and gracious God”

“Abounding in love and faithfulness”

“Yet he does not leave the guilty unpunished.”

Ah! This is the very opposite of how the gods in my hometown and many other regions of the world are regarded. They are seen as powerful, hard to appease and delivering such instant justice that people who feel aggrieved would rather go and consult them than leave their ‘enemies’ to this seemingly slow and suspiciously weak God of Abraham.

In fact, these descriptive phrases of the nature of the Living God also appear later in Numbers 14:15-19, in which Moses prayed with respect—when God was really angry with the Israelites for their rebellion and grumbling regarding the Promised Land—reminding Him, so-to-speak, of how He wanted to be known among the nations.

Make no mistake, the Lord was angry, very angry. “How long will these people treat me with contempt? He said. “How long will they refuse to believe in me, in spite of all the signs I have performed among them? I will strike them down with a plague and destroy them…” (Ex. 14:11-12).

Moses succeeded in assuaging God’s anger by reminding Him of His fame that Egypt and the rest of the world had heard about and challenged Him to display His strength and power. What is that strength and power? “Now may the Lord’s strength be displayed, just as you have declared: ‘The Lord is slow to anger, abounding in love and forgiving sin and rebellion.

Yet he does not leave the guilty unpunished; he punishes the children for the sin of the parents to the third and fourth generation.’ In accordance with your great love, forgive the sin of these people…” (Numbers 14:18-19, NIV). God relented; God forgave; Moses succeeded.

To give or not to give?

So why hasn’t God killed Daniel Obinim…yet? Secondly, for Obinim’s sake. God gives a long rope, a very long rope, but not forever. Contrary to what many think of God as never giving up, God does give up and give over (Romans 1:24,26, 28; Acts 7:42; Psalm 81:12) but He is very, very, very, so very patient with us. “The Lord is not slow in keeping his promise, as some understand slowness.

Instead he is patient with you, not wanting anyone to perish, but everyone to come to repentance.” (2 Peter 3:9) And when we finally give in, when we say we have done a 180, there must be fruit to show—proof by the way we live that we have truly repented of our ways and turned to God.

Beauty and the bastard

Two weekends ago I got off the phone with a cocktail of emotions, mainly deep anger. No, not at the suicidal university graduate full of potential yet now struggling to keep her own body and soul together plus that of her new-born bastard but at the so-called pastor, supposedly married, who put her in that situation.

I did not even realize September 10, the day we spoke on phone, was world anti-suicide day; but that lady had just narrowly escaped suicide the night before by chancing upon one of my blogs. She decided to hold off, hold on and gathered the courage to give me a call.

Self-styled pastors, prophets and bishops like Obinim who apparently are accountable to no one and do whatever they like ‘in the name of the LORD’ seem to get away with it…for now. Now you know why.

Before the flight would land, this beautiful, fair-coloured lady sitting directly behind Obinim and his aide-de-camp reaches out to the latter and asks for the ‘Bishop’s’ number. From where I sit I can see the grin on Obinim’s face as he nods in approval for the contact to be given. Business is booming, judgment can wait; here comes another victim.

It struck me to the core when someone made a very poignant quote: “when others are in the wrong we demand justice but when we are wrong we seek mercy.” How profoundly true! Now you know why God hasn’t killed Obinim…yet—it’s the same reason He hasn’t finished off you and me.