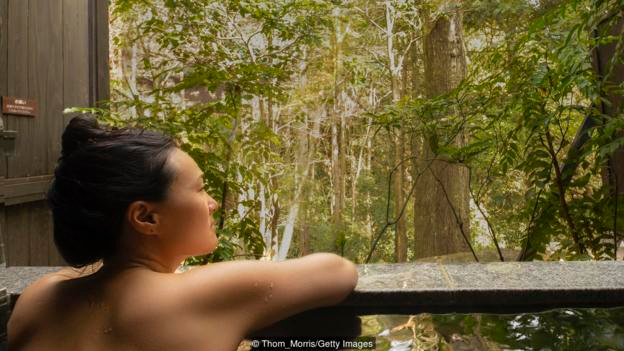 Perched beside the Kurobe River deep in the Japanese Alps, the small, milky-blue hot spring I was about to dip my toes into was a rather simple affair. A handful of yellow buckets served as washing stations, and clothes were balanced on nearby rocks. This was no luxury spa experience – but that was the beauty of it.

For more than 1,000 years, natural hot springs – known as onsen – have been an essential part of Japanese life, cleansing both the body and soul. There are more than 3,000 onsen to choose from in Japan. Mineral-rich and sourced directly from the 25,000 thermal springs that bubble beneath the surface of the geothermal archipelago, the baths provide a sanctuary for personal reflection and community, as families, friends and neighbours shed their clothes and step into the steaming waters together. From smart, inner-city spas to ocean-side caves, each of Japan’s onsen offers certain charms – but one is set in a location like no other.

Set beside the Kurobe River deep in the Japanese Alps, Japan’s most remote onsen takes two days to reach

Known as Japan’s most remote onsen, Takamagahara (literally: “the high plains of heaven”) takes two days to reach – a true pilgrimage of dedication for the most extreme bathers. In order to soak in its restorative waters in the Chubu-Sangaku National Park, hikers and onsen-devotees trek 40km through forests and along rivers, clamber up steep inclines and spend nights in a series of isolated mountain huts. This is no beginner’s trail: it is a true expedition, requiring physical endurance as well as a deep understanding of the capricious mountain climate.

The reward lies in a modest cluster of baths set deep in a rocky valley. While the views, minerals and designs are unique to every Japanese onsen, they each share an intangible connection to nature. In today’s increasingly urbanised world, it’s unsurprising that open-air baths, known as rotenburo, are among the most highly sought after, offering a glimpse of a starry night sky and a cooling breeze as bathers recline in the mineral-rich waters. Miles from civilisation, surrounded by alpine trees and serenaded with the sound of rushing water, Takamagahara is the zenith of the rotenburo experience.

To soak in Takamagahara’s restorative waters, hikers must trek 40km through forests, along rivers and through high-altitude plateaus

While a four-day round-trip hike may seem extreme, Japan’s tradition of pilgrimage stretches back centuries – a perfect example of the journey being equal to, if not transcending, the destination. Once visited by Edo-era pilgrims, the mountains surrounding Takamagahara were deified and seen as manifestations of kami, or spirits of Japan’s indigenous Shinto religion.

I am a self-confessed onsen lover, and so this was not the first trip I had planned around bathing in a Japanese onsen, but it was certainly the most intense. From my first onsen experience in the depths of Hokkaido’s winter, lost in conversations over the hours spent soaking and relaxing with friends, I was converted on the spot. Five years later, with the summer’s heat finally dissipating, a mountain hike seemed like the perfect introduction to a fresh season of hot spring adventures. Picturing wild, remote mountainsides without many souls in sight – a striking contrast from my busy Tokyo neighbourhood – I took a late-night bullet train to Toyama and set off on a winding two-hour bus journey to the trail head near the small village of Oritate early the following morning.

Within minutes, the steep ascent of root-woven slopes and rocky paths confirmed the trail’s formidable reputation. Trying to keep pace with my hiking partner, I continued, breathless but determined, through narrow, roughly carved trails. Greeted with many a “Konnichiwa!” and the occasional “Hello!” at the unexpected sight of two Westerners, we were by no means alone.

As we climbed, mist rolled over the hills, transforming the landscape entirely as we lost mobile phone signal and felt the final ties of the everyday world fall away. Our rocky path up the slope was soon replaced with wooden planks used to protect the carpet of alpine flora. The weathered boards are an unusual but picturesque sight, snaking along slopes far into the distance, drawing your eyes along with them. We began to spot dashes of colour among the grass, that last of the season’s alpine flowers.

It was one of the last weekends before the mountain huts, known as yamagoya, would close for winter. These huts – which get their supplies helicoptered in each month and are run by live-in staff – enable hikers to forego their weighty camping gear by providing simple sleeping quarters and home-cooked meals. As the only connection to the outside world, the huts are a vital network in the remote mountain ranges, offering detailed forecasts and route recommendations based on weather patterns and tracking hikers to ensure no-one goes missing. As we arrived at our first yamagoya to rest, Tarodaira, we stopped for a simple Nepalese curry and refilled our bottles with fresh mountain water at the spluttering path-side spigot.

The slanting frame of Yakushizawa, our overnight hut, appeared in the distance about a 12km hike later. Warped by years of weathering, the wooden hut was still strong, our host assured us, knocking the wooden panels as he guided us to the shared dorms. Lined with tatami mats and neatly stacked blankets, it was a simple setup and already busy with the night’s guests. As we recovered on the balcony overlooking the Kurobe River, I watched as the apparently inexhaustible hikers unpacked simple fishing rods before setting off along the water’s edge.

At dinner, crisp tempura and steaming bowls of rice doled out from a central pot made their way from guest to guest. Soup from a shared urn and tea completed the meal as enthusiastic calls of “itadakimasu” (“bon appétit”) rang out from the guests around us. As we chatted with our neighbours, elbow to elbow, the cheery calls of “kanpai!” rang out, beers knocking together in the universal ritual of raised glasses and recognised success. Given our final destination, it was a fitting communal feast.

One of the joys of public baths is an opportunity to connect closely with friends, family or colleagues. Soaking side by side, bathers can shrug off the hierarchical ties of Japanese culture and speak openly amid the steam of the hot springs. The concept, known as hadaka no tsukiai, (“naked communion”), removes barriers and forges bonds which would be impossible without the intimacy of the shared bath. When everyone is naked, everyone is even. In fact, an onsen’s tranquil atmosphere hangs on the delicate balance of an unspoken communal code. From the removal of shoes to cleaning oneself at individual washing stations, this etiquette soon becomes second nature – a cleansing escape from the humdrum of everyday life with each stage.

The next morning, we rose before sunrise, joining our fellow hikers for rice topped with salty, sour umeboshi (pickled plums) along with soup and tamagoyaki (omelette). We thanked our hosts and set off. Trekking on wooden planks and hopping across their collapsed counterparts, we steadily made our way towards the plateau of Kumanodaira and its renowned views towards the distant mountain peaks.

The trail continued along rough, stony paths. Rounding a corner, we stumbled into two elderly hikers reaching carefully into the hedges lining the route. “Blueberries!” they exclaimed, pointing to a branch. The friends explained that they hike throughout the Japanese Alps every year, and cackled at my claim that the hike was difficult. They had been climbing these mountains since they were each 10 and said they later summited K2 and Everest together. Assuring us we would enjoy the onsen, they wished us well as our paths separated.

Scaling ladders and negotiating narrow bridges, we finally made it to the humble Takamagahara hut and spotted signs for the onsen. We dropped off our bags and headed down a rocky path 20 minutes towards the famed hot spring, buoyed by the prospect of indulging in our long-awaited soak.

The ripe smell of sulphur – an inescapable but pleasing aroma for onsen enthusiasts – was the first hint of this hidden hot spring. While Takamagahara’s two gender-separated pools are shielded with simple bamboo covers, a third mixed bath lies open to the elements – and the views. This mixed-gender bathing, known as konyoku, was common in Japan up until the 19th Century, but now rural onsen are some of the last to continue this tradition. When we arrived, the pale blue waters of the mixed-bathing pool already held two naked, elderly men.

Just across the way, I spotted the entrance to the women’s bath, but lingered a little to chat with the bathers, including one who admitted to having what he called “onsen-mania”. He explained that he had hiked eight days to reach Takamagahara from Gifu prefecture. When we asked about the source of his impressive determination, he professed his love for rotenburo and gestured at our surroundings. “What could be better than this?” he asked.

As my hiking mate joined our newfound friends, I slipped away to the women’s bath and found a simple rock-lined pool with a wooden stall for changing. I was entirely alone, shielded from the bathers below but with open views of the trees and mountains beyond. I stepped into the translucent pool and the hours of hiking melted away as I admired the rocky peaks in the distance. Then, I sank deeper, allowing the water to cover my shoulders.

Miles from civilisation, surrounded by alpine trees and serenaded by rushing water, Takamagahara is the zenith of the rotenburo experience

Before embarking on this trip, I had thought that being “at one with nature” meant largely being alone in it. And since I had never been to any of Japan’s few remaining konyoku baths, I had never truly considered bathing in a mixed onsen. But as I stretched my shoulders in the steam, I remembered the Japanese phrase “kachou fuugetsu”. While translating literally to “flower, bird, wind, moon”, it represents the importance of experiencing nature’s beauty and using the opportunity to learn about yourself.

As I thought back to the countless moments of hadaka no tsukiai I’d experienced in female-only baths and Japan’s long tradition of mixed bathing, I hesitantly stepped out of the women’s-only pool and took one last look at my towel. With a quick splash from the yellow buckets, I dipped my toes in to join the other bathers and experience the essence of communal onsen bliss atop Japan’s high plains of heaven.