A 21-year-old woman in El Salvador whose baby was found dead in the toilet where she gave birth has been cleared of murder during a retrial.

Evelyn Hernández had always maintained she was innocent, saying that she did not know she was pregnant and lost consciousness during the birth.

Prosecutors had asked for a prison sentence of 40 years.

Her case has been closely watched in El Salvador and abroad with women’s rights activists calling for her acquittal.

El Salvador has one of the strictest anti-abortion laws in the world. Abortion is illegal in all circumstances and those found guilty face between two and eight years in jail.

But in many cases, including the one against Ms Hernández, the charge is changed to one of aggravated homicide, which carries a minimum sentence of 30 years.

“Thank God, justice has been done,” she said as she stood on the steps outside the court house, free after 33 “hard” months behind bars. “My future is to continue studying and to move forward with my goals. I am happy,” she said, according to AFP news agency.

“I am about to explode with happiness,” her defence lawyer, Bertha Maria Deleon, tweeted.

However, she added, the fight was not over: Ms Hernández’s case was the first of its kind in El Salvador in which a full retrial had been ordered.

Previously, women accused of aborting their babies had had their sentences commuted after their 30-year jail terms were deemed “disproportionate and immoral”, but their verdicts were not overturned.

“We can and we will continue fighting because there are still are women accused who need justice urgently,” Ms Deleon tweeted.

Amnesty International described the verdict as a “resounding victory for the rights of women in El Salvador” and called on the government to “end the shameful and discriminatory practice of criminalising women”.

The Office of the United Nations High Commissioner for Human Rights has in the past also called on El Salvador to reform its abortion laws.

Evelyn Hernández said she experienced severe stomach pains and bleeding while at her home in rural El Salvador on 6 April 2016.

She went to the toilet, located in an outhouse, where she fainted. Her mother took her to a hospital, where doctors found she had given birth.

She was arrested after the body of her baby was found in the toilet’s septic tank. 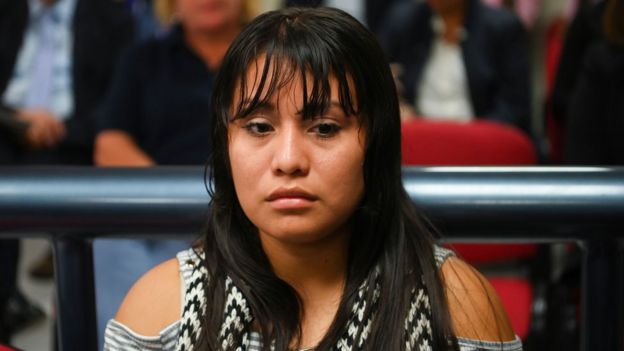 Ms Hernández had repeatedly said she was innocent

Ms Hernández, who was 18 at the time, said she had been raped by a gang member but that she had no idea that she was pregnant.

She said she had confused the symptoms of pregnancy with stomach ache because she had experienced intermittent bleeding, which she thought was her menstrual period.

“If I’d known I was pregnant I would have awaited [the birth] with pride and joy,” she said in the past.

She also said that while she had “felt something come loose” inside her, she did not hear a baby cry out and did not realise she was giving birth.

She was initially accused of abortion but the charge was changed to one of aggravated homicide with prosecutors arguing she had hidden her pregnancy and not sought antenatal care.

In July 2017, the judge ruled that Ms Hernández knew she was pregnant and found her guilty. She was sentenced to 30 years in prison of which she has already served 33 months.

Why was there a retrial?

Ms Hernández’s lawyers appealed against the judge’s decision. They said forensic tests showed that the baby had died of meconium aspiration, inhaling his own early stool. This can happen while the baby is still in the uterus, during delivery or immediately after birth.

The lawyers said the test proved that Ms Hernández had not tried to abort the baby but that it had died of natural causes. “There is no crime,” defence lawyer Bertha María Deleón said. 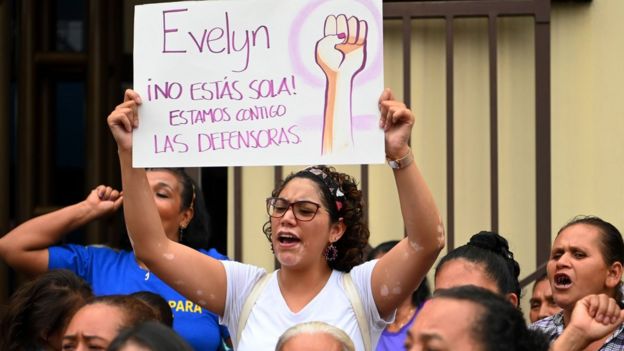 A protester holding a sign saying “Evelyn you’re not alone! We’re with you” outside the court

In February 2019, El Salvador’s supreme court annulled the 2017 conviction citing absence of evidence and ordered a retrial with a new judge.

Ms Hernández was released from jail pending the retrial, which started in July.

Prosecutors in the retrial asked for an even harsher sentence – 40 years in prison – than that originally imposed.

Salvadorean pro-choice campaigner Morena Herrera said the prosecutors’ demand for such a steep sentence was “extremely grave”. She accused them of not taking into consideration the circumstances in which the birth took place and the severe blood loss Ms Hernández suffered.

Why is the case significant?

Rights organisations in El Salvador say there are at least 17 other women in jail under the country’s strict abortion laws.

Over the last decade, campaigners have managed to free around 30 through evidence reviews.

Ms Hernández’s retrial is the first such case to be heard under new President Nayib Bukele, who took office in June, and women’s groups are hoping he could usher in a more lenient stance on the issue.

President Bukele has said that he opposes abortion but has expressed sympathy with women suffering miscarriages who then come under suspicion.

“If a poor woman suffers a miscarriage, she’s immediately suspected of having had an abortion. That’s where the issue of social inequality comes into play,” he said while he was running for president.