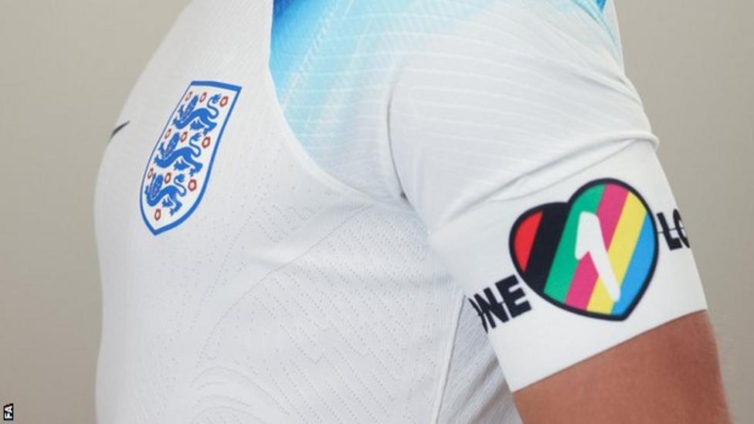 England men’s captain Harry Kane will wear a OneLove armband for the team’s Nations League games and at the 2022 World Cup in Qatar.

The Netherlands began the OneLove campaign prior to Euro 2020 to promote diversity and inclusion, and as a message against discrimination.

Their captains will also wear the armband at the 2022 World Cup in Qatar.

“I am honoured to join my fellow national team captains in supporting the important OneLove campaign,” said Kane, who will wear the armband for the first time in a Nations League game against Italy on Friday.

“As captains we may all be competing against each other on the pitch, but we stand together against all forms of discrimination. This is even more relevant at a time when division is common in society.

“Wearing the armband together on behalf of our teams will send a clear message when the world is watching.”

The England squad will also invite migrant workers to the team’s World Cup training base in Al Wakrah to engage with players.

The English Football Association has backed calls for compensation to be awarded for “any injury or death related to any construction project” for the World Cup.

It is estimated up to 30,000 migrant labourers have been used on projects to build seven stadiums for the finals in Qatar, as well as a new airport, new metro and new roads.

However, Amnesty International says that since 2010, hundreds of thousands of migrant workers have faced human rights abuses while employed to build wider infrastructure necessary to host the tournament, as well as the venues.

“Along with the other members of the Uefa working group on human rights, we are pushing Fifa for an update on the concept of a Migrant Workers’ Centre in Qatar, to provide advice and help for migrant workers,” said FA chief executive Mark Bullingham.

“It is clear that Qatar has brought in progressive legislation in the last few years to give workers rights, so this concept will help this legislation to take effect.

“We have met a variety of workers in Qatar on our visits to the country and, whilst they recognise the substantial progress, there are areas in which further support would make a huge difference.

“We continue to push for the principle of compensation for the families of migrant workers who have lost their lives or have been injured in construction projects.

“Again, we are pushing Fifa for an update on the compensation fund which has been consistently referenced as a safety net where workers and their families have been unable to secure compensation from the construction companies.”

Amnesty International has called on Fifa to set up a compensation fund of at least $440m (£350m) for migrant workers who have suffered “human rights abuses” during preparations for the Qatar World Cup.

“The FA’s pledge to support efforts to remedy abuses suffered by thousands of overseas workers in Qatar – including with a Migrant Workers’ Centre – could be significant, but we still need to see whether this is seriously taken up either by the Qatari authorities or by Fifa,” said Felix Jakens, Amnesty International UK’s head of priority campaigns.

“Today’s announcement is welcome, but the FA now needs to specifically support a Fifa compensation fund for abused workers and the families of those who’ve died to make the World Cup happen.”

Given the human rights concerns that have dogged Qatar’s hosting of the World Cup, the FA has been under mounting pressure for months to find its voice, and join other European national football associations in taking a firm stance when it comes to discrimination and the treatment of migrant workers.

Some will therefore welcome this statement as a significant intervention, and the wearing of the ‘OneLove’ armband as an important message, adding to the pressure on the authorities in Qatar to introduce further reforms.

However, others have already expressed disappointment at the absence of any specific reference to homosexuality and gay rights, and the failure to back calls for a Fifa worker compensation fund that matches the amount of prize money due to be distributed.

There are also concerns that a memorandum of understanding the FA signed with the Qatari FA in 2018 may have limited the extent to which the governing body felt able to use stronger language in calling for more change.