Would marriage ruin our happiness? - MyJoyOnline.com

Would marriage ruin our happiness? 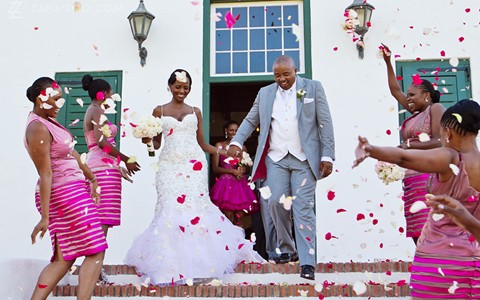 We wrote our vows the day before our wedding, sitting on a rock. I was pregnant, and beside me, shuddering in the wind, was my little plastic grocery bag of Ritz crackers, cereal bars and ginger ale. The bag went everywhere with me, even to the jewelry store where Tyler and I bought the rings, and if I ate and sipped at a steady pace I could keep the vomiting down to about four times a day.

We didn’t know what we were doing, and we were terrified. Our parents were all divorced. My father had remarried and divorced again. His mother had done the same. We had aunts and uncles, cousins, siblings and stepsiblings who were divorced. Even my grandparents, back in the ’30s, had split up.

In the pictures in our wedding album, we look like we’re at a funeral, our faces so pale and stunned. And our parents, stepparents, and ex-stepparents are in various degrees of discomfort, too. My father had agreed to come to my wedding only if my mother promised not to speak to him. My mother, who does not like being told what to do, would not promise this, but I told my father she had.

Before I married, a therapist said to me, “You seem to think that right now is the most you will ever love each other, like you only get one tank of gas for the long trip of marriage. You’ve never considered the possibility that love will grow.”

Love will grow? It sounded like a fairy tale with magic seeds. My only hope about marriage was that the love would die really, really slowly, so slowly I might not notice.

Marriage was not something to which I’d ever aspired. My parents were married for 21 years, yet there was no wedding album I ever saw, no framed pictures of them together, eating cake or dancing. By the time I came along, they were living separate lives in the same house. I have only one memory of them in the same room together, one Christmas night when I’d asked them to pose in front of the tree for a photo I took with my new camera. It was a Polaroid, and I kept it on my bureau until I was 10, when my mother told me she was going to leave my father, and asked if I would come with her.

We would leave in a week, after my birthday and the Fourth of July fair, to stay for the summer with my grandfather and his wife. We would have to keep it a secret from my father. I said yes, just as I would have said yes to my father, had he come to me that afternoon instead. We took the TV from the kitchen, and left a note on the dinner table for him to see when he came home from work.

A few months after Tyler and I moved in together, I took a job as a high school English teacher, replacing a woman on maternity leave. One morning in April, as I was packing up my books, Tyler began pacing our apartment in his parka. He was about to catch a plane to Cleveland for his great-aunt’s funeral.

He stood at the window for a long time, then swung back around and asked, maybe too loudly, “Let me ask you a question.”

I thought he was going to ask me to take him to the airport, which was irritating because I’d miss the morning assembly.

“Do you want to get married?”

Then there was a box, and a ring.

He was waiting for an answer. “Maybe,” I said.

Why did he want to ruin our happiness with marriage?

Up until then all our decisions had been haphazard. My moving in with him had been the result of an argument about grocery shopping. Neither of us planned ahead. Our bedroom had clothes for carpet. Our cars were moving landfills. Who was this man who’d gone to a store and chosen a ring, who’d paced and paced and then blurted it all out? It was my first intimation that he was braver and more grown-up than I was.

We sat on the couch and he told me we could define marriage in any way we wanted. We could make our own rules.

The ring was too big, so I put it on a chain around my neck and went to school. He took a cab to the airport. We told our families and our friends. I used the word fiancé sardonically. But we could not set a date. We had enacted the first part of the ritual — the question, the ring, the answer — but we could not commit to the second half, the permanent-commitment, lifelong part.

At the end of June, I was told I had extensive endometriosis, a condition that had prevented several women I knew from conceiving children. Tyler and I cried together on a patch of grass outside the clinic. I said I was so sorry. Tyler said we would adopt.

Three weeks later I was pregnant. We looked at the stick and its two lines. Our sudden, mutual, complete elation surprised us. We took photos of ourselves holding the stick. We screamed and giggled and hugged and hugged. We went swimming and played Marco Polo. Then we called all our parents and fixed a date for the day of our marriage.

My mother kept the promise she refused to make and did not speak to my father at our wedding. They both kicked it up on the dance floor, my father wearing a party hat and my mother linking arms with my mother-in-law and Tyler’s stepsisters and can-can-ing around the periphery. They were watching each other, though. Afterward, my father kept mentioning my mother’s “hideous” suit. And my mother was “shocked” by his white hair.

I quit the novel I was working on about an old Irish spinster and began writing about a woman who gets married impulsively and is terrified. I made her problems gigantic, her barriers to intimacy extreme, and her failures flamboyant. While my character made a mess of her marriage, mine began to take root.

Before all this, when I was in my early 30s, for a little while, I dated two men.

One was tall and sexy. He wore a leather jacket and drove a car that smelled like dirty socks. He was hard to read, but he kept asking me out and I was madly attracted to him. The other was adorable and chatty. He liked to kiss and talk at the same time, to narrate his feelings for me.

I was waiting tables at a fancy restaurant at the time, and occasionally it would be closed for a private party. Once, at one of these parties, there was a fortuneteller who sat in a corner, available to the guests. When she slipped out for a cigarette, I followed her. I told her I was dating two men and felt confused. For a long time she didn’t answer, then she said, “Tell me their names.”

“Tyler really loves you,” she said.

I thought maybe she’d gotten the names scrambled. Tyler was the sexy, silent one. The one who had never mentioned love or anything close to it.

But when he asked me a few weeks later to decide between him and the other guy, I saw on his face how much that decision meant to him.

The fortuneteller was right.

And our love grew and grew, as if from a magic seed.