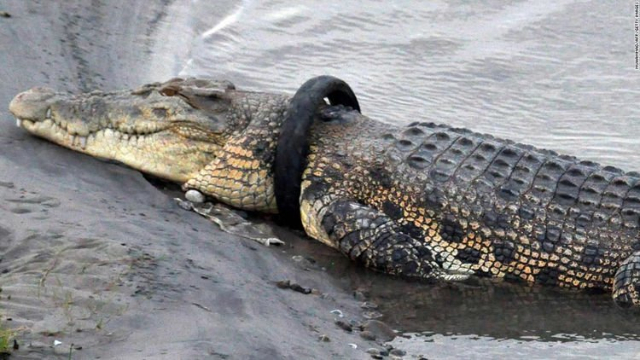 Indonesian officials are offering a monetary reward to whoever manages to remove a motorcycle tyre from the neck of a 13-foot-long crocodile.

The full-grown crocodile has reportedly been wearing the tire around its neck since 2016, but authorities in Palu, the capital of Central Sulawesi, are worried that it may end up strangling the reptile, so they are turning to the public for help. In 2018, conservationist and “animal whisperer” Muhammad Panji tried to remove the tire, and later that year the local conservation office tried luring the 4-meter-long crocodile with food. Both attempts proved unsuccessful so Palu officials are now hoping that brave locals can do the impossible for an unspecified cash prize. 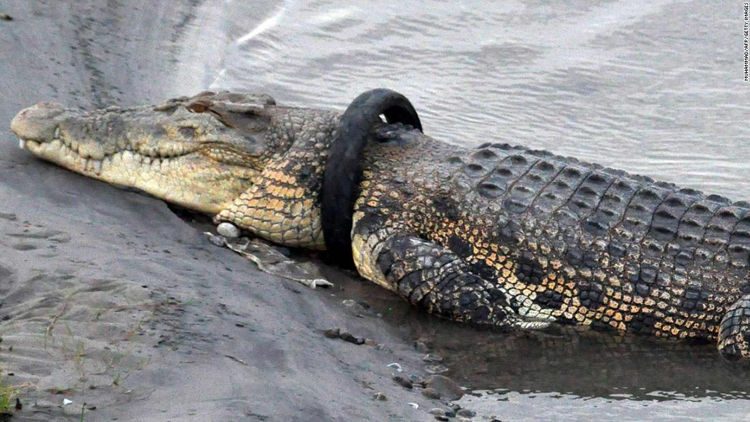 “A reward will be given to anyone who can release the hapless reptile,” Central Sulawesi BKSDA chief Hasmuni Hasmar said, adding that he was not asking amateurs to hunt down and take on a potentially deadly crocodile, but rather people with a background in wildlife rescue.

“We’re asking the general public not to get close to the crocodile or disturb its habitat,” Hasmar clarified.

The Antara news agency reported that the crocodile may be a Siamese crocodile, a species native to South-Eastern Asia, that happens to be critically endangered with around 1,000 specimens living in the wild. 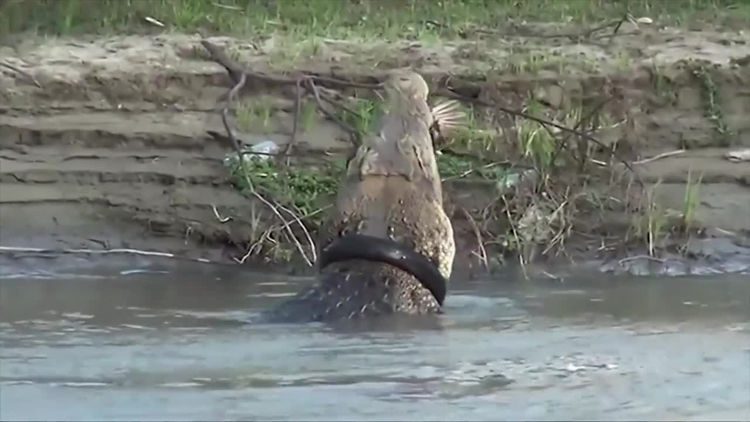 You’re probably wondering why authorities or local conservationists don’t just shoot the crocodile with a tranquilizer gun and remove the motorcycle tyre while it is sedated. Well, UK newspaper The Telegraph reports that the risk of it swimming away before the drugs take effect is too high. So they basically need someone who can immobilize the reptile without tranquilizing it, and remove the tire.

“Its body is getting bigger and the tyre, which should be 14 inches, is stifling it,” an Indonesian conservation board official warned last year. “If the tyre is not removed immediately, it will strangle the crocodile because of its growing body.”

The tire is believed to have come from a mini scooter that had been thrown into the river, but the circumstances of how it got stuck around the crocodile’s neck for so many years are unclear.

So if you’re interested in earning an unspecified sum of money and think you have some of the late Steve Irwin’s crocodile wrestling skills, head down to Palu, in Indonesia, and try freeing it of the rubber necklace it’s been wearing for years.

DISCLAIMER: The Views, Comments, Opinions, Contributions and Statements made by Readers and Contributors on this platform do not necessarily represent the views or policy of Multimedia Group Limited.
Tags:
Crocodile
Indonesia