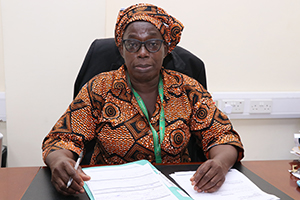 The Administrator at the National Identification Authority (NIA), Cecilia Erzuah, has pleaded with mobile telecommunication networks to extend the deadline for the registration of SIM cards across the country.

According to her, since the exercise begun, scores of Ghanaians have not been able to participate, and therefore the need for the mobile network operators to consider a possible extension to the end of the year.

Speaking to the press on Tuesday, she explained that there’s a backlog of people who are yet to receive their Ghana Cards, hence, the timeline for the SIM registration must be reviewed to accommodate such embattled individuals.

“Well, I said the SIM card registration, they should look at the time frame and extend it. A lot of people haven’t received their cards. There are people who did double, triple, fourth registration, and the system has their cards. All these cards have to be released for them. And we need to work on them at the backend.

Otherwise all these people will lose their SIM. There are Ghanaians who used to be foreigners and have now entered the database as Ghanaians. When they go, MTN refuses to accept their PIN because the prefix; if you’re an Australian, it will start with AU. If you’re a Togolese, it starts with TG. All these people have not been able to register their cards. I think they [mobile network operators] should extend to the end of the year”, she stated.

In calling for the extension, Cecilia Erzuah also added that, “What is the rush for? They should extend to the end of the year, so that people can register the card properly. They’re putting unnecessary pressure on Ghanaians”.

The comments by the NIA administrator follow complaints from a section of the populace, who have bemoaned the challenges associated with the ongoing SIM registration exercise.

According to the affected persons, the exercise has been characterised by a lot of hurdles, and therefore the need for telcos to be considerate with their timelines.

In an earlier interview with JoyNews’ Blessed Sogah, some mobile phone users said they had to queue for hours and sometimes days to get their sims registered.

“Everywhere you go you are very stranded, wasting a whole lot of days here is very frustrating. They should extend the days so we could have time to do this. For some of us we are supposed to go to work or do our normal routine, but we are stuck here throughout the day”, one mobile phone user said.

Others blamed the poor network services at the registration centers; explaining that users could be at the centers for hours but are unable to register because the network aren’t stable.

“So we are pleading with them to do something about the time”, one lady told JoyNews.

At a registration center in Nungua, one mobile phone user explained that she and others would officially resume work next week. They are however unable to register their sims.

She pleaded for an extension. “They should give us enough time so we can do it”, she said.

The ongoing SIM registration exercise, is part of efforts by the National Communication Authority to deal with SIM related crimes, and other challenges associated with the usage of mobile phones by citizens across the country.