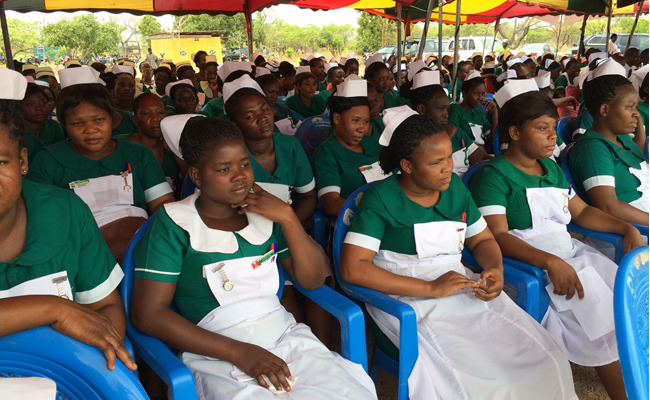 The Youth Employment Agency (YEA) has announced its readiness in rolling out its numerous modules in February, 2016 to reduce the rising rate of unemployment among the youth in the country.

To begin with, the Agency is expected to recruit over 20,000 young people under its Youth in Health Module to train and equip them as Community Health Workers.

This would be followed with subsequent recruitments in the Youth in Security, Youth in Coastal Sanitation, Youth in Agriculture and Youth in Afforestation amongst others.

The initiative, according to the Agency, is to augment the services being provided by health professionals in the various health institutions across the country, especially, those in the rural and deprived communities.

The exercise is under the umbrella of the Ministry of Employment and Labour Relations and is in collaboration with the Ministry of Health (MoH), Ghana Health Service (GHS), World Vision International, Ghana, One Million Community Health Workers (ImCHW) and the Global Campaign of the UN Sustainable Development Goals Network (SDGN).

That aside, the initiative is also seeking to create meaningful and sustainable jobs for the people of Ghana. The unemployment rate among Ghana’s youth currently stands at 5.2%, according to records by the Agency.

“I seek to make tackling youth unemployment an all-inclusive effort and the pivot of the Youth Employment Agency as captured in our mandate, calling on all involved – political leaders, public servants, private organizations, social partners, NGOs and most importantly you, the media – to work together towards one goal: to allow all well-meaning and motivated young Ghanaians living everywhere in Ghana to find decent, sustainable employment,” he noted.

All the modules that are expected to be carried out, according to Mr. Beecham, shall be “known broadly as Community Improvement Programs.”

The Agency, he added, would this time around, engage the services of “credible private institutions” to help it carry out the various modules it would be rolling out.

“The Agency would like to state on record that, any institution or organization indicted in the erstwhile ‘GYEEDA’ Auditor Generals’ Report will not be considered for any of our current modules until cleared and advised otherwise by our legal department and the Attorney-General’s department”, he stated.

Minister for Employment and Labour Relations, Haruna Iddrisu, in his address said with the rolling out of the YEA modules “Ghana’s youth can no longer wait to be told we will be recruiting”.

He therefore charged the newly appointed CEO and Board Members of YEA to expedite the recruitment process so that the first batch of CHWs is recruited in February. He also charged recruiters to offer equal opportunity to all Ghanaians who qualify for the program, and assured the public that “Youth Employment will not be run as it was in the days under GYEEDA and YEP.

On his part, the Minister for Health, Alex Segbefia, expressed his excitement about the presence of the Ghana CHW program and said its presence indicated “…an ongoing process of fulfilling the President’s will for sector collaboration”.

He was very optimistic that the CHW programme will make a great contribution towards achieving the Sustainable Development Goals (SDGs) and for improving maternal, newborn and child health in the country.

The Country Director for 1mCHW, Ghana, Chief Nat Ebo Nsarko, commenting on the initiative said his outfit has a mission to accelerate the attainment of universal health coverage in rural sub-Saharan Africa and would therefore support governments and other institutions dedicated to community health worker scale-up in the context of health systems.

To that effect, he said the 1mCHW will support the Ghana Health Service (GHS) to roll out an e-health component with the CHW program.

“This objective will ensure that real-time data flow that informs the process of health care delivery in rural areas is transformative. Once again, this has been proven by the mobile health (mHealth) program that was operational in the Millennium Villages across ten countries where CHWs use smart phones with a CommCare application that supports the work of the CHW at the household”, he added.

The National Director of World Vision International, Ghana, Hubert Charles, told the gathering that the SDGs have come into effect and therefore urged his colleague development partners to put in more effort than before in working together to ensure universal health coverage for the citizens of Ghana.

The SDGs, he said, herald a new era in community health which recognizes “that it’s not enough for children of Ghana to survive, but we must enable and empower them and their families to thrive. Ghana has made a step into the future with this innovative CHW program, in which the needs of the whole family will be addressed, including previously neglected family members, such as adolescents, and the elderly.”