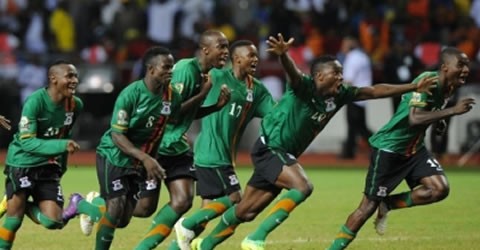 The Football Association of Zambia and its Government are working on a good winning package for the Chipolopolo ahead their 2014 World Cup qualifier against Ghana in June.

According to FAZ communications manager Erick Mwanza this is to motivate them win their opening two matches against Sudan and Ghana.

Mwanza said it was good that the team has developed the mentality of winning matches without asking too much about the monetary gain saying that was the key to them conquering Africa during the AFCON finals.

He said the players would be told how much they will be paid when they report for camp and that FAZ will also keep them in touch should the money from the pledges be collected in full so that could be paid.

FAZ says it is yet to receive the complete K2 billion in pledges donated to the national soccer team following the team’s victory of the 2012 Africa Cup of Nations (AFCON) after defeating Ivory Coast 8-7 on penalties.

“The players were paid their winning bonuses from the AFCON tournament, what is remaining is to pay them the money from the pledges collected during the luncheon held at State House,” said FAZ communications manager Erick Mwanza.

“We are hopeful that all the monies will be in before the team regroups in May for the World Cup qualifiers so that we can equitably share the money among the players and the technical bench.”

The Chipolopolo host the Black Stars in Lusaka on June 8 in a repeat of the 2012 Africa Cup of Nations semi-final.