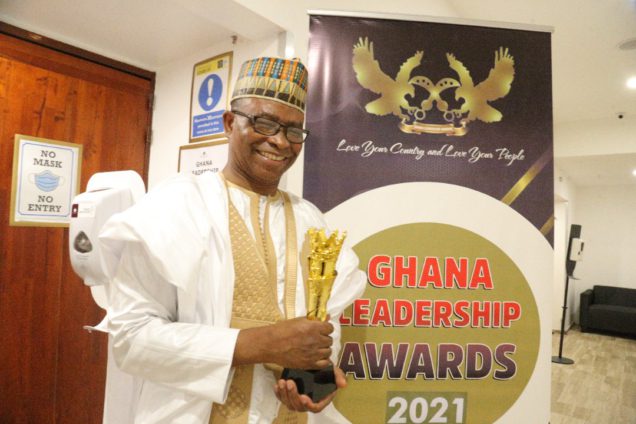 Chief Executive Officer (CEO) of the Zongo Development Fund, Dr. Arafat Suleman Abdulai has been honoured with the Ghana Order of Merit award for his role in developing Zongo communities and other deprived areas nationwide.

That category was the overall best award on the night of the 2021 Ghana Leadership Awards ceremony on Saturday, December 4.

Themed “Celebrating our heroes in a peaceful Ghana”, the ceremony saw a host of other prominent individuals and organisations receive similar awards for their efforts at promoting the economic, social, political and leadership development of the country in the last one year.’

Speaking in an interview with Myjoyonline after the ceremony, Dr. Abdulai acknowledged the award as being a cardinal motivation and boost to the Fund’s operations.

“This award means a lot to us, because the Zongo Development Fund, unlike other institutions that have precedents to copy or learn from, is the pacesetter; we have to chart the cause for generations yet unborn to come and follow. At that, we face difficulties, as there are no specific blueprints to follow. But if the beginning is reaping this kind of fruits, then we can only imagine what can be achieved when we finally set our foot on the ground” he said.

According to Dr. Abdulai, as of 30th November this year, the Fund has been able to build to completion 43 six-classroom unit blocks, with some 85 more at various levels of completion nationwide.

Additionally, over 520 brilliant yet needy students living in the aforementioned communities have been captured under the Zongo Development Fund’s scholarship program. This fortifies the institution’s resolve to invest massively in the education of Zongo youth.

“We have 20 AstroTurf’s under construction, and out of the number, about eight have been completed. Beginning this December, we’ll be handing them over”.

The Zongo Development Fund CEO also hinted at some “model secondary schools” for the Zongo community scheduled to be undertaken in 2022.

“The target is 16 of them, such that there’s one in every region. But we’ll start with three next year – one in Kasoa, in the Central Region, another in Effiduase, Ashanti, and the other at Sanerugu in the Northern Region”.