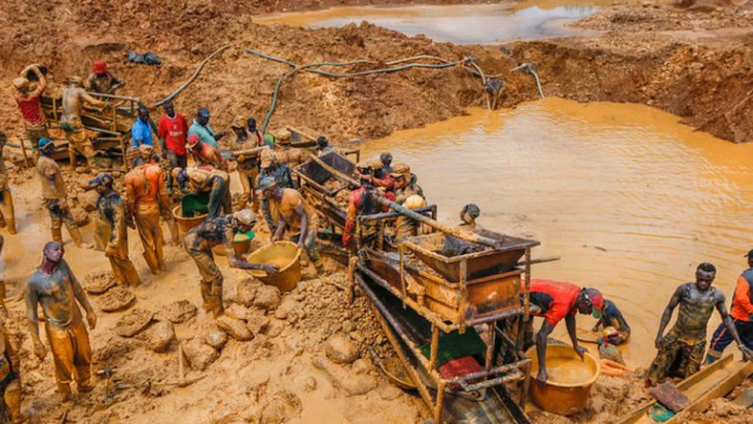 As the activities of illegal miners continue to pose a threat to the operations of AngloGold, Obuasi Mine, two local groups in the Obuasi Municipality have petitioned the President and King of the Asante Kingdom to intervene.

The Appianin-Bonsec Fun club and Obuasi Local Contractors Association want President Nana Addo Dankwah Akufo-Addo and Otumfuo Osei Tutu II to step in to save the mine from collapse.

The two groups embarked on a float on the principal streets of Obuasi to draw the public’s attention to the nefarious activities of the illegal miners and their potential threat to the local economy after which they later organised a joint press conference.

It would be recalled that some illegal miners were recently captured in a viral video running away with their booty after invading underground sites of AngloGold Ashanti in Obuasi.

Some 30 illegal miners were also arrested in Obuasi by soldiers while allegedly mining on a concession belonging to AngloGold Ashanti.

This prompted the Obuasi Municipal Chief Executive, Mr Elijah Adansi-Bonah, who is also the Chairman of the Municipal Security Taskforce, to issue a stern warning to the perpetrators to quit the concessions or face the wrath of the Assembly.

The situation, however, remained unchanged, prompting the two groups to add their voices to the numerous calls for a stop to the disturbing development.

Mr Anthony Nature Coffie, Secretary of Appianin-Bonsec Fun Club, called for the swift intervention of the President and Otumfuo to halt the wanton invasion of AngloGold Ashanti concession.

He recalled how a former Communication Manager of AngloGold Ashanti, Mr John Owusu died tragically in 2015 as a result of the fight against illegal mining in the company’s concession.

“We are all witnesses to events preceding the redevelopment of the Obuasi Mine when the closure of the Mine partially due to the activities of illegal miners resulted in untold economic hardship in Obuasi and accompanying social vices like armed robbery and prostitution,” he observed.

He made a passionate appeal to the government to beef up security at the Obuasi Mine to protect it from the illegal miners in the collective interest of the people, especially posterity.

Mr Solomon Acheampong, the Secretary of the Obuasi Local Contractors, said it was in the interest of all stakeholders to save the Mine from collapse, considering the huge negative impact it could have on businesses and livelihoods.

DISCLAIMER: The Views, Comments, Opinions, Contributions and Statements made by Readers and Contributors on this platform do not necessarily represent the views or policy of Multimedia Group Limited.
Tags:
Anglogold
Obuasi Mine