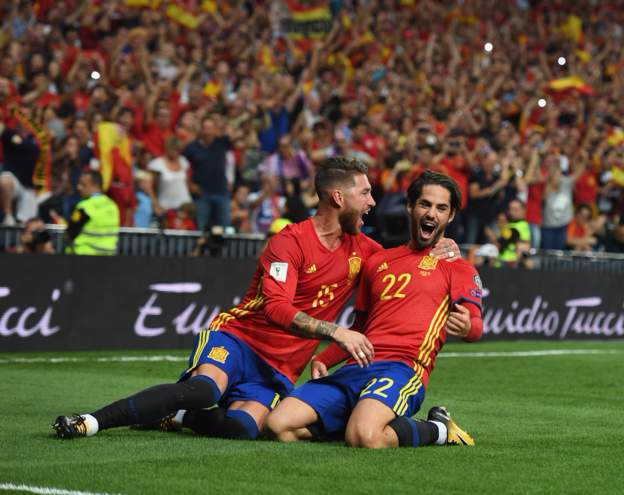 Isco scored twice as a scintillating Spain beat Italy at the Bernabeu to take a huge step towards qualifying for the World Cup from Group G.

The Real Madrid playmaker curled home a free-kick and then smashed in a second as Spain named no recognised striker.

Chelsea's Alvaro Morata came on to add a third from Sergio Ramos' cross.

Italy, who had not lost any qualifier since 2006, trail Spain by three points with a much worse goal difference and are likely to be in the play-offs.

Only the winners of each group qualify directly for Russia, with the eight best ranked second-placed teams playing off.

Spain – who looked back to their best – brought on record goalscorer David Villa for Isco late on, his first cap since retiring from international football and moving to MLS in 2014.

The Azzurri are still four points above third-placed Albania, who beat Liechtenstein 2-0.

Macedonia beat Israel 1-0 in the group's other match.

Ukraine are top of Group I following a 2-0 win over Turkey, new Borussia Dortmund striker Andriy Yarmolenko scoring both goals.

Croatia, who are one point behind them, have a game in hand – after their match with Kosovo was abandoned at 0-0 in the first half because of a waterlogged pitch. It will be replayed on Sunday.

Iceland, behind Croatia on goal difference, lost 1-0 to Finland.