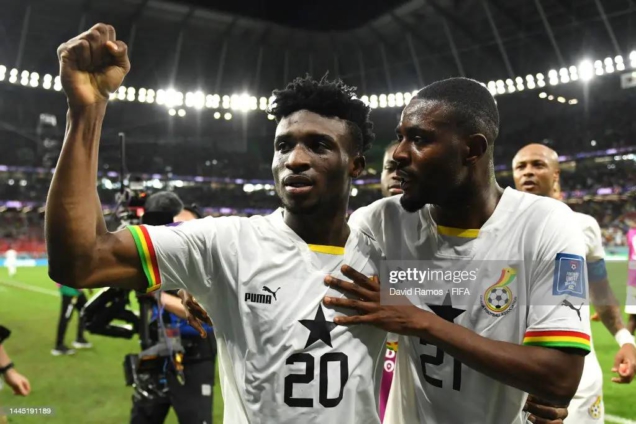 Black Stars bounced back to winning ways on Monday, November 28, as they defeated South Korea in their second Group H game.

A brace from Mohammed Kudus and another from Mohammed Salisu saw Otto Addo’s side pick up their first points of the 2022 FIFA World Cup.

After a nervy start to the game, the Black Stars found their mojo after the 20th-minute mark with the midfield taking control of the game.

However, the opening goal came 24 minutes into the game with Jordan Ayew creating the chance from a free-kick he won in South Korea’s half.

The Crystal Palace forward sent into the penalty box a troubling cross with Mohammed Salisu pouncing on the loose ball after Andre Ayew’s contact to open the scoring.

The goal was the Southampton star’s second goal in the last three appearances for the national team having scored against Switzerland in an international friendly before the start of the World Cup.

Jordan then set up Mohammed Kudus for the game’s second goal and put the Black Stars in a comfortable position heading into the break.

Back from recess, Ghana looked certain to continue their dominance with Tariq Lamptey finding the first chance for Ghana. But his effort was far from troubling the South Korea goalkeeper.

That failed effort looked to have been the turning point as South Korea scored two quick goals to level the score.

Gue-Sung Cho beat Salisu to head past Lawrence Ati-Zigi to pull one back while he also rose above Gideon Mensah for the equalizer three minutes later.

While the Black Stars looked to have lost their confidence, a moment of brilliance saw Mensah drive forward and cut back for Inaki Williams, who couldn’t shoot into the net but Kudus was on the end and curled the ball past the goalkeeper to restore Ghana’s lead.

Despite late attempts from the Koreans, the game ended 3-2 with Ghana earning a vital win in Group H.

Otto Addo’s side will now face Uruguay in their last game looking to secure qualification to the next stage of the competition.

DISCLAIMER: The Views, Comments, Opinions, Contributions and Statements made by Readers and Contributors on this platform do not necessarily represent the views or policy of Multimedia Group Limited.
Tags:
Black Stars
Mohammed Kudus
South Korea