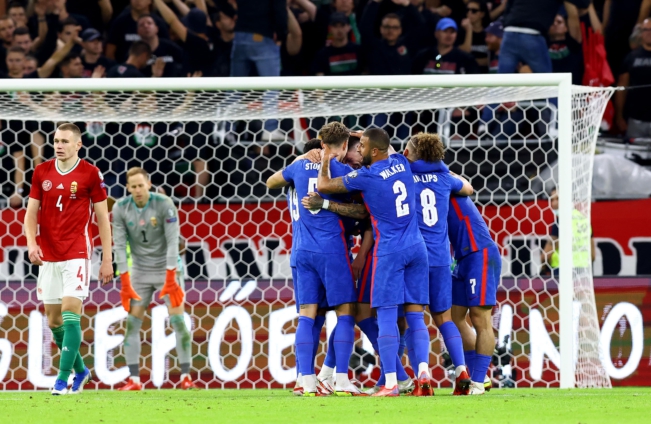 England consolidated their position of power in pursuit of a place at next year’s World Cup in Qatar with a hugely impressive victory against Hungary in a hostile and often unsavoury atmosphere in Budapest.

Gareth Southgate’s side made it four wins from four qualifying games to open up a five-point lead over Poland, who England face in Warsaw after Sunday’s meeting with Andorra at Wembley, at the top of Group I.

In a match which contained several flashpoints in the crowd, including loud jeering when England’s players took the knee before kick-off, objects being thrown and racist chanting, they came through a mediocre first half to take total control after the break and run out easy winners.

England captain Harry Kane missed a great chance to give them the lead shortly after the break but it did not prove costly as Raheem Sterling crowned a smooth move involving Declan Rice, Jack Grealish and Mason Mount to slide home his 16th goal in his past 24 international appearance after 55 minutes.

Sterling then turned provider eight minutes later as his deflected cross sat up perfectly for Kane to head home, Harry Maguire adding a third as his header from Luke Shaw’s corner slipped through the grasp of Hungary keeper Peter Gulacsi.

In one of many incidents, Shaw was showered with plastic cups before taking the corner, as were England’s celebrating players after Maguire scored. Sterling suffered a similar fate after putting England ahead when he took off his shirt to display a message in tribute to a close friend who died a few days ago.

England’s night was rounded off three minutes from time when Gulacsi’s second serious error gifted them a fourth as he allowed Rice’s routing shot under his body.

Italy’s homecoming after winning Euro 2020 ended in a disappointing draw with Bulgaria in World Cup qualifying in Florence.

Federico Chiesa blasted Roberto Mancini’s side into the lead from outside the box.

Atanas Iliev, who plays for Ascoli in Serie B, scored the equaliser against the run of play.

Italy dominated, with 27 shots to Hungary’s four, but Ciro Immobile’s effort cleared off the line was as close as they got.

They top Group C with 10 points from four games, four points above Switzerland, who have only played twice.