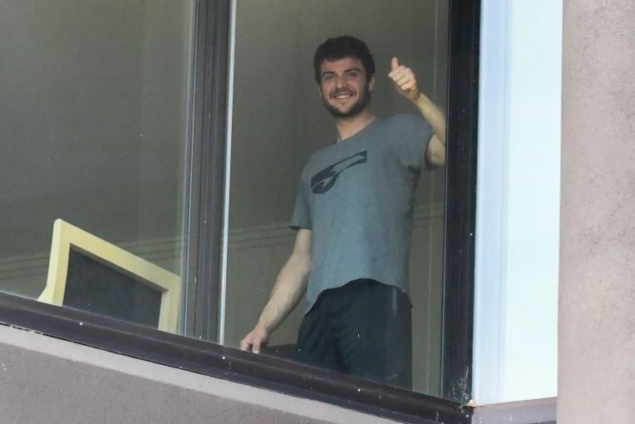 Health authorities confirmed there had been three positive tests for covid-19 on Saturday, and another on Sunday.

None of the cases so far have involved players, although one was Sylvain Bruneau, who coaches Canadian women’s world number 7 Bianca Andreescu.

Everyone on board was considered a close contact and ordered not to leave their hotel rooms for the 14-day mandatory quarantine period.

Other players who landed in Australia are also undertaking a mandatory 14-day quarantine but can leave their hotels for five hours a day to train.

The Australian Open starts on February 8.

The world’s best tennis players are arriving, ready to fight for the first Grand Slam title of 2021. Before the battle can begin they must quarantine for 14 days, take daily COVID-19 tests, physically distance, and practice & train under strictly controlled COVIDSafe conditions. pic.twitter.com/XrJDmc9vCi

Craig Tiley, director of the Australian Open, told Nine News Network on Sunday that the year’s first Grand Slam will go ahead as scheduled and that Tennis Australia, the governing body, would look at altering the leadup tournaments to help the affected players.

“We are reviewing the schedule leading in to see what we can do to assist these players,” Tiley said.

“Obviously it is not what we wanted to happen. That is why we took the mitigating measures, but we are in this situation, we have to deal with it … The Australian Open is going ahead and we will continue to do the best we possibly can do to ensure those players have the best opportunity.”

‘I would have stayed home’

Several players, including Sorana Cirstea of Romania, Belinda Bencic of Switzerland and Yulia Putintseva of Kazakhstan, took to social media to complain about not being able to train, with some claiming they were not told about a hard lockdown if one person tested positive.

Cirstea, the women’s world number 71, tweeted: “If they would have told us this rule before, I would not play in Australia. I would have stayed home. They told us we would fly at 20 per cent capacity, in sections, and we would be a close contact only if my team or cohort tests positive.”

I agree…if they would have told us this rule before i would not play Australia…I would have stayed home. They told us we would fly at 20% capacity, in sections and we would be a close contact ONLY if my team or cohort tests positive . https://t.co/kF58HEijqq

Bencic said she and the other 46 players were at a disadvantage.

“We are not complaining (about being) in quarantine. We are complaining because of unequal practice/playing conditions before quite important tournaments,” she said on social media.

Tiley admitted it was hard, but said the players had been warned there would be a “significant risk” of restrictions being imposed on players if there were positive COVID-19 cases.

“We did make it very clear in the beginning,” Tiley said. “Now we have to manage an environment over the next 14 days for those who won’t be able to practice.

“It’s a tough situation. We’ve got to do whatever we can to make it as fair as possible for those players that are in lockdown.”

Some players have already breached the strict quarantine rules by opening their doors.

Victoria state COVID-19 quarantine commissioner Emma Cassar warned that they faced fines of up to 20,000 Australian dollars (US$15,300) and persistent offenders risked being sent to another hotel with a police officer stationed outside their door.

She cited one player “who opened his door to try and have a conversation with his training mate down the hallway”, while another bought takeaway food for friends on the same floor “and was praising his great efforts and opened his door to do so”.