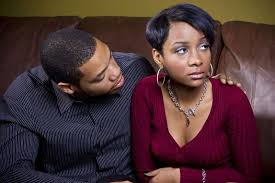 Here’s the thing about relationships. We all want to be in one (let’s just admit that no one likes to be alone), but at the same time, we’re always doing things to drive each other crazy and jeopardize our chances of holding on to a good one.

Don’t get me wrong; I would never advocate changing your behaviour just for a guy. But there are certain things women are prone to doing in relationships that they wouldn’t do otherwise. These irritating habits and behaviours aren’t who we really are, but for some reason, we’re compelled to act them out with our partners, or would-be partners.

These are the kind of things you do and then kick yourself for later. Sometimes it’s as if you’re outside your body, watching helplessly as you see yourself doing them, wishing you could make yourself stop. The good news is, you can actually make yourself stop. And becoming aware of these behaviours is the first step toward cutting them out.

If he says you’re beautiful, don’t respond by telling him you haven’t showered today, you’re not wearing any makeup, and you’ve got a wicked case of PMS. Maybe he actually likes you in grungy sweats and reading glasses, with your greasy hair pulled into a ponytail. If he didn’t, why would he say it? Just accept the compliment.

Look, any man worth going out with is going to pay for you anyway – but at least offer to pick up the check once in a while. It’s just rude not to make the obligatory reaching-for-your-wallet movement. And once you’ve been dating for a while, actually make a point of paying for drinks, dessert, or movie tickets now and then. Make sure he feels like your boyfriend, not an ATM.

You know that girl you hate-follow on Instagram? The one in your yoga class who always puts her mat in front and does every pose perfectly? Your boyfriend doesn’t want to see her latest annoying post. And that co-worker who made you look bad in front of your boss? He’s sick of listening to you rant about her every night. Men don’t engage in this kind of mean-girl drama, and hearing you do it just irritates them. It also makes them wonder if you’re complaining about him to your other friends – so save the snark for your girlfriends.

4. Purposely trying to make them jealous.

When you’re annoyed at your boyfriend and you flirt with someone else at a party, all the while looking out of the corner of your eye to see if he notices, rest assured – he does. But if you’re hoping spark his jealousy and make him realize how much he loves you and doesn’t want to lose you, I’ve got bad news. You’re actually doing the opposite. Men see right through this manipulative behavior, and they loathe it.

5. Judging your relationship according to social media.

Looking at other people’s relationships through the lens of social media and comparing your real-life relationship to their filtered one is a recipe for misery. If you’re constantly snapping selfies with your boyfriend and tagging him in an attempt to look like the perfect couple online, or freaking out because you’re not hitting relationship milestones as quickly as your Facebook friends and their significant others, you might soon find your relationship status changed to “single.”

6. Making him feel guilty for having other interests.

Contrary to what some people might think, it’s totally healthy for people to maintain their outside interests and do things separately from their partners on a fairly regular basis. Trying to guilt your BAE into skipping his weekly bar trivia night, or getting mad because he wants to watch baseball instead of hanging out with you for the third night in a row, is guaranteed to piss him off and push him away.

We’ve all done it. When we’re upset about something, but we don’t want to have to tell him about it (he should know!), we respond to our boyfriend’s innocent, “what’s wrong, baby?” with a shrug and a mumbled, “nothing, I’m fine.” This might be the thing women do that men hate the most. Just tell him what’s wrong. Because chances are, he’s not going to dig. So don’t get mad when he shrugs back and you and walks away. You’ve been warned.