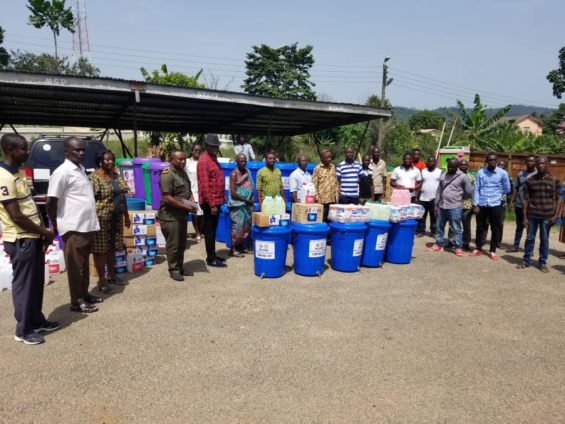 Member of Parliament for Abuakwa South in the Eastern Region, Samuel Atta Akyea together with the Municipal Assembly, has presented various items to institutions leading the fight against the new coronavirus within the municipality.

Beneficiary institutions included all departments and public institutions as well as all electoral areas within the area.

They were provided by Member of Parliament for the area, Samuel Atta Akyea who is also Works and Housing Minister, the Kibi Goldfields Ltd, Ministry of Local Government and Rural Development and the Abuakwa South Municipal Assembly.

At a short ceremony at the forecourt of the Assembly to present the items Thursday, April 2, 2020, Municipal Chief Executive, Kojo Ofori-Sarfo, entreated the beneficiary institutions to put the items to judicious use as the nation steps up efforts to curb the spread of the virus.

Mr. Ofori-Safo also stressed on the need for people to keep to the safety precautions outlined by the Ghana Health Service and the World Health Organisation, which includes regular handwashing and social distancing.

Practicing these, he noted, will go a long way to reducing the rate of infection in the country.

Early last week, the Assembly presented some of the items to markets, lorry stations, CHP Compounds among others.

Ghana as of Thursday, April 2, has recorded 204 cases with five deaths while two persons are said to be in critical condition, according to the Ghana Health Service. The GHS said some 37 persons have so far recovered and are being monitored from home.

With 183 cases, Greater Accra has the highest infections. The Northern region has 10, Ashanti, 9, Upper West, 1 and Eastern, 1.