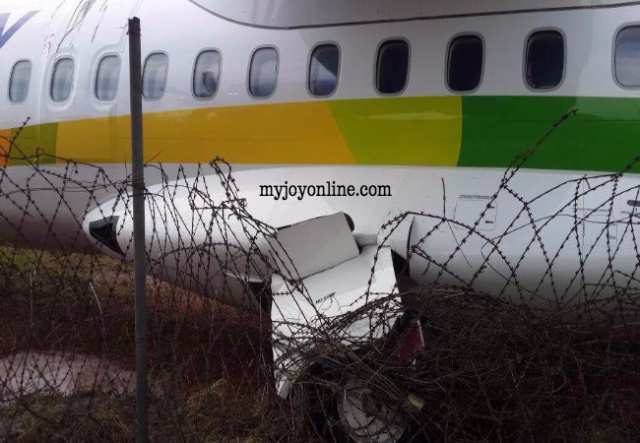 The Bureau of Public Safety (BPS) has partially blamed the Ghana Civil Aviation Authority (GCAA) for the Starbow accident that almost claimed some 68 lives aboard its plane.

According to the Bureau, the Authority could have prevented the incident if it had ensured that an earlier airworthiness of directive regarding the seats of the Pilots and Co-Pilot were implemented.

The Kumasi bound aircraft overshot the runway at Kotoka International Airport as it attempted to take off in November last year.

In a statement issued Sunday and signed by Nana Yaw Akwada, the Executive Director of BPS, he warned that the country’s air safety is endangered as the ad hoc investigators of the Starbow crash treated GCAA with kid gloves.

“We found it extremely worrying that investigators having established evidential and unambiguous violation on the part of the GCAA still went ahead to fault only Starbow and the flight crew without any recommendation whatsoever for the regulator [GCAA],” he said.

The Bureau said it has taken further steps to write to the International Civil Aviation Organisation (ICAO) to subject processes, procedures and personnel of the Authority to an audit.

It is further on calling on parliament to investigate the matter as this poses a threat to passenger safety.

Below is the press release: