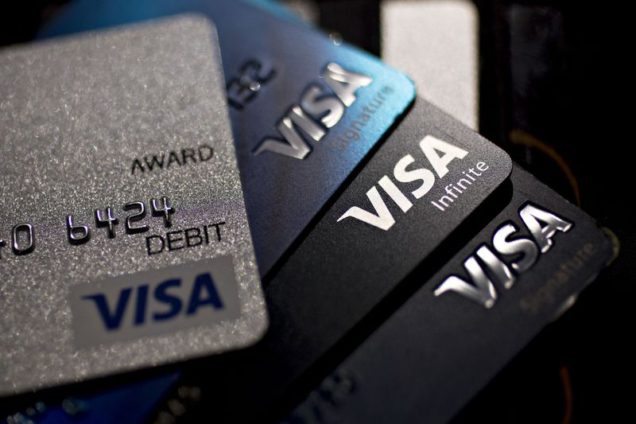 Visa Inc. credit and debit cards are arranged for a photograph in Washington, D.C., U.S., on Monday, April 22, 2019. Visa Inc. is scheduled to release earnings figures on April 24.Source: BLOOMBERG

Amazon.com Inc. will stop accepting purchases made with Visa Inc. credit cards issued in the U.K. starting next year, the latest attempt by the online giant to push back against transaction fees charged by payment networks.

Amazon users were told of the changes this week. After making purchases they received a notification from the company saying that from Jan. 19, 2022 “we will no longer accept Visa credit cards issued in the U.K.” due to the high fees charged to process transactions. An Amazon spokesperson said “the cost of accepting card payments continues to be an obstacle for businesses striving to provide the best prices for customers.”

“We are very disappointed that Amazon is threatening to restrict consumer choice in the future. When consumer choice is limited, nobody wins,” a Visa spokesman said in an email. “We have a long-standing relationship with Amazon, and we continue to work toward a resolution.”

The issue is a particularly sensitive one in the U.K. following Brexit, with both Visa and Mastercard drawing scrutiny for upping certain fees now the U.K. is outside the European Union. Research this week showed credit and debit card costs have increased by 150 million pounds a year, with both U.K. and European retailers losing out.

Britain’s departure from the EU removed caps on transactions between the U.K. and the European Economic Area allowing card firms to increase cross-border payment fees, according to retail payments advisory firm CMS Payments Intelligence and the British Retail Consortium.

Card fees are already a flashpoint between merchants, banks and payment networks such as Mastercard and Visa, the world’s largest.

Retailers have long complained about the billions they spend each year to accept electronic payments, a figure that’s grown to more than $100 billion a year in the U.S. as fees increase and consumers flock to premium cards, which carry higher interchange rates — fees charged every time a consumer uses a card.

Amazon has tried different methods over the years to limit the amount of fees it paid from customers using credit cards. In the past, it has incentivized consumers to use debit cards to add cash to their Amazon accounts and use that for purchases rather than credit cards, and has also given the option for individuals to link their checking accounts for payments.

Back in 2016, Wal-Mart Stores Inc. sued Visa Inc.’s U.S. unit over the cost of processing payments. In 2018, supermarket chain Kroger Co. stopped accepting Visa’s credit cards at its Foods Co. subsidiary in California. It widened the ban when it stopped accepting the network’s cards at Smith’s, another unit, before the two sides reached a truce in October 2019.

In the U.S., Visa and Mastercard have postponed plans to boost the fees U.S. merchants pay when consumers use credit cards online, pushing back the changes — originally slated to take effect in April 2020 — to April 2022 because of the pandemic.

Visa’s changes would have seen rates go up or down depending on the merchant and the way a consumer pays for their purchases, according to a document Visa sent to banks in 2020 outlining the changes, Bloomberg has reported.

The document set out higher rates for transactions on e-commerce sites, while retailers in certain services categories, such as real estate and education, saw fees decline. The delay came after retailers lobbied to avoid a jump in costs for accepting cards at a time when consumers are especially reliant on online shopping.