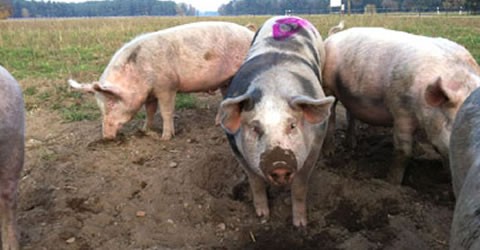 A prominent member of South Africa's governing African National Congress (ANC), Thandi Modise, has hit back at campaign groups over their plan to bring a private prosecution against her for alleged animal cruelty, including the deaths of pigs and goats.

The threat to prosecute Ms Modise, who is the chairwoman of the upper chamber of parliament, amounted to an "abuse of judicial processes for narrow political ends", parliament's spokesman Moloto Mothapo said in a statement.

The campaign groups wanted to "advance a narrow narrative of failure of black farming", he added.

"The threat to privately prosecute coincides with the process led by Parliament regarding [the] possible amendment to Section 25 of the constitution to expropriate land without compensation [from white farmers]," Mr Mothapo said.

It is important to note that state prosecutors have declined to charge her because she had "delegated people she trusted to look after the farm while she is away fulfilling her parliamentary responsibilities", he added.

Mainly Afrikaner lobby group AfriForum plans to prosecute Ms Modise after the Society for the Prevention of Cruelty to Animals reported that dozens of animals had died on her farm in 2014 because of neglect.

Private prosecutions are extremely rare in South Africa, and are usually brought when lawyers are confident that the state had blundered by refusing to charge a suspect.