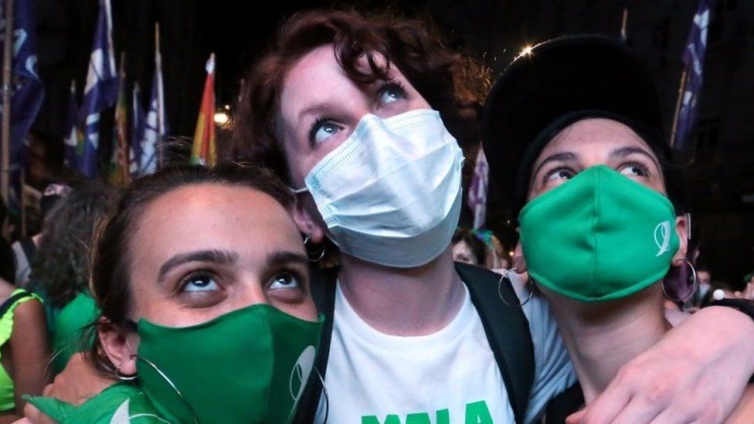 Argentina’s Congress has legalised abortions up to the 14th week of pregnancy.

Senators voted in favour of the bill after a marathon session with 38 in favour, 29 against and one abstention.

The law is groundbreaking for Latin America, a region which has some of the world’s most restrictive abortion laws.

The bill had already been approved by the Chamber of Deputies and is backed by President Alberto Fernández.

Large crowds of campaigners both for and against abortion had gathered outside Congress to try to sway undecided senators.

The Catholic Church, which remains highly influential in Latin America, had opposed the move.

It had called on senators to reject the bill. Pope Francis, who is Argentine, had tweeted just hours before the debate that “every outcast is a child of God”.

The Son of God was born an outcast, in order to tell us that every outcast is a child of God. He came into the world as each child comes into the world, weak and vulnerable, so that we can learn to accept our weaknesses with tender love.

Until now, abortions were only permitted in Argentina in cases of rape or when the mother’s health was at risk.

Activists have campaigned for the change in the law for years.

Abortions are completely banned in El Salvador, Nicaragua and the Dominican Republic and only allowed in certain restricted circumstances in most other Latin American nations.

In the wider region, only Uruguay, Cuba, Guyana and parts of Mexico currently allow women to request an abortion, with varying limits on the number of weeks of pregnancy in which an abortion is legal.

DISCLAIMER: The Views, Comments, Opinions, Contributions and Statements made by Readers and Contributors on this platform do not necessarily represent the views or policy of Multimedia Group Limited.
Tags:
Argentina