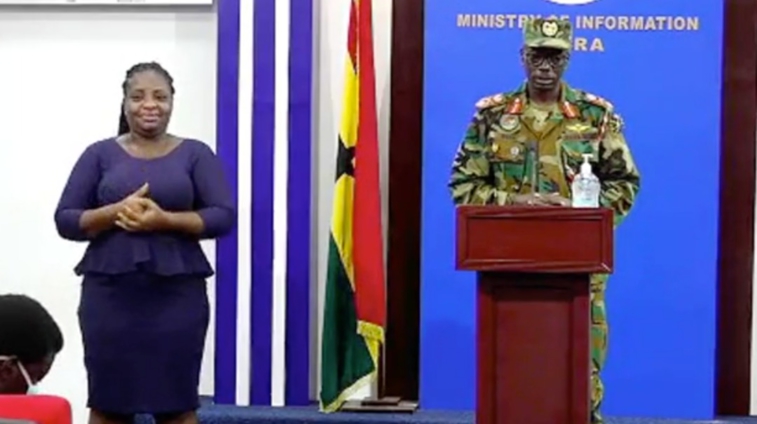 Brigadier General of the Ghana Armed Forces, Nsiah Yeboah, has cautioned the public to desist from sharing false information on the ongoing 14-day lockdown.

He stated that videos and pictures circulating on social media which misrepresent the actual situation on the ground are discouraging.

“Most of us Ghanaians are religious and we know that telling lies about somebody is something that God does not permit. So those who are doing it, I don’t know what your agenda is, stop it,” he pleaded.

Meanwhile, he noted that the operations of the security service at their various stations have been successful so far although there are people who do not comply.

“We are achieving the objectives we set for ourselves. Some few may fall victim to the law so we are trying our best to make them understand,” he said.

The President, Nana Akufo-Addo declared a 14-day partial lockdown in three cities across the country; Accra, Tema and Greater Kumasi.

The security forces are to help to enforce this directive so the spread of the novel coronavirus is contained in these areas.

There have been reports of abuse by some of the servicemen enforcing the directives.

But the Brigadier General said there have been no brutalities meted out to civilians as portrayed in some videos circulating.

He highlighted that there has been only one case of a soldier who was involved in unprofessional conduct which did not involve slapping.

“We have had only one incident and had one That soldier has been withdrawn and sent back to the barracks. I have tasked the military police to go into the matter to investigate”

Brigadier General Yeboah has assured that the deployed men are professionals and have been briefed on their rules of engagement in their line of duty.

“Let’s encourage our officers in the field to do the job and do it well. It is in our own interest that we support them,” he counselled.

DISCLAIMER: The Views, Comments, Opinions, Contributions and Statements made by Readers and Contributors on this platform do not necessarily represent the views or policy of Multimedia Group Limited.
Tags:
Brigadier General Nsiah Yeboah
Coronavirus
Coronavirus in Ghana