As Prosper Ogum departs from Kotoko, what legacy does he leave? 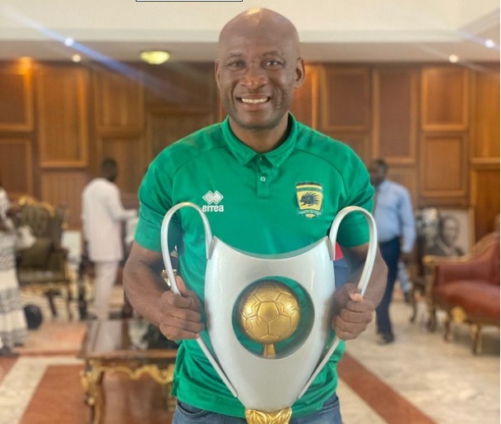 Not so many coaches get an opportunity to lead a club as big as Asante Kotoko in the Ghana Premier League – but for Prosper Ogum Narteh – the signs were clear for him after an impressive work with WAFA.

Nicknamed ‘Obenfo’, Ogum was named as the new head coach of the Porcupine Warriors after a season that the team missed out on the league title to Accra Hearts of Oak by just four points.

On his side, he had just led WAFA to a historic third-place finish in the Premier League, a feat that only solidified Kotoko’s chase for him.

With Kotoko undergoing their pre-season in Dubai, there were lots of high hopes for the team going into the 2021/22 season.

With quite a number of additions and a new face on the touchline, the team looked set and ready to fight for pride – a title they had missed since the 2013/14 season.

Ogum’s early season magic and the rapport with his players put Kotoko on the right path and eventually earn-marked the ‘favourites for the title tag even before the end of the first round of the season.

His blend of experience and new faces were attributes fans loved about him and the fact he was achieving results on the field, also saw him become a fans’ favourite at the Baba Yara Stadium.

The Kumasi-based side ended the season with 67 points, amassing 36 points at home and 31 points away from home.

Under Ogum, Kotoko travelled to Dormaa to beat Aduana for the first time in their history at the Nana Agyemang Badu I Stadium.

He was also the mastermind behind the club’s first-ever win over WAFA in Sogakope.

Before him, Kotoko had failed to beat Hearts in Kumasi since 2012 but a 1-0 win in April ended that winless run.

As mentioned earlier, he had the privilege to become the first coach to win the league title for the club since 2014.

In the just-ended season, Kotokoconceded the least goals (20), picked up the most points away from home and scored the most goals.

Ogum would have been a major part of the team’s campaign in Africa next season but his resignation now means the club will have to turn attention to other options to lead them as they make a return to continental football.

It may be just one season as the gaffer of the club, but Prosper Ogum has definitely left a good impression in the minds of the Porcupines.