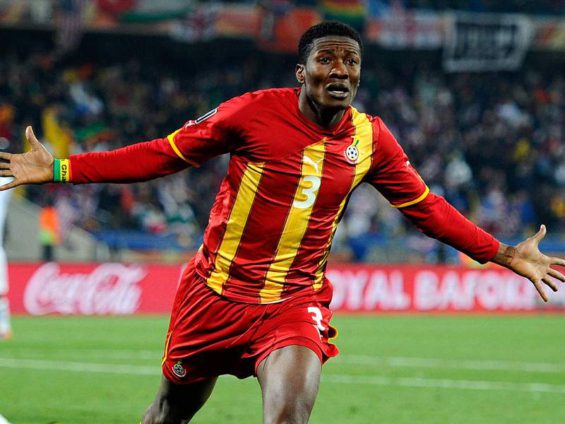 The 77th minute in Ghana’s 2006 World Cup Qualifier versus Somalia signaled a new dawn for the Black Stars.

Nana Arhin Duah is probably Ghana’s most important substitution in football. After scoring two goals for Ghana in that same fixture, the former Asante Kotoko forward paved the way for a 17-year old to make an attempt at filling in.

Three days away from turning 18, Asamoah Gyan was making his first appearance for the national team, but there was more history beckoning the teenager.

He will go on to score 51 goals for the national team, but the now 36 year old will always remember his first.

“I have scored a lot of goals as everybody knows but I will say the goal I scored against Somalia in 2003 is my memorable goal as it was my debut appearance for my country at the senior level,” Gyan said in an interview.

With the Black Stars, Gyan surfed the course of international football, carrying a talented national team on his back to the apex of football.

Since his debut in 2003, the Black Stars have played in nine of the ten organized international competitions; six times in the African Cup of Nations and thrice in the FIFA World Cup.

Over the period, the Black Stars have scored 126 goals in all their qualifying campaigns for the competitions. Sixteen of those goals have been provided by Asamoah Gyan.

Perhaps the most important of all came with his brace in Ghana’s 6-1 rout of Egypt in Kumasi, to ensure they remained the sole deciders of their 2014 World Cup fate.

And maybe, Gyan’s opener in Khartoum versus Sudan, in an encounter Ghana needed to win to qualify for the 2012 African Cup of Nations, adds up to some of his most crucial qualifying goals.

More often than not, Gyan stood out as a lone Black Star for Ghana and Africa, popping up with headlining moments. The striker defined clutch and provided many of such moments. Here are five of those.

In their World Cup debut, the Black Stars lost their first game to Italy and were set to face Czech Republic.

A win was required but with Czech Republic ranked by FIFA as one of the best sides at the 2006 World Cup, the odds were stacked against the Stars.

Nevertheless, Gyan was primed to set history. One minute and eight seconds after kickoff, Gyan scored the fastest goal of the 2006 World Cup. He received a pass from Stephen Appiah on the edge of the 18-yard box, turned his marker and struck the ball past Petr Cech.

Quarter-final of the FIFA World Cup in Africa, and the Black Stars are the only African team left standing. The five other African countries were unable to make it pass the group stages, hence the Black Stars were the sole bearers of the African beam of hope.

Retrospectively, it was a moment set up for Gyan, the front-page gobbling striker who was almost always there.

With the game in the first period of extra time, Gyan raced unto a long clearance, fought off two defenders and in one sweep, smashed the ball past a hopeless Tim Howard.

It may have merely been a friendly, but the atmosphere surrounding this particular fixture meant those on the losing end of it will bear more than necessary pain.

And the Black Stars, which was at a certain peak with a wide array of talent at the time, was set to feel the painful brush of defeat in Wembley but Gyan had different ideas.

It was another individual goal from the striker. Picking up the ball from in-between England’s midfield and defense, Gyan showed nimble feet to work his way around a swarm of white shirts, rinsing Lescott in the process and placed the ball beyond the reach of a diving Joe Hart.

Ghana became only the third team not to lose to England that year.

Gyan was once again Ghana’s biggest star in Luanda as the Black Stars beat Nigeria to book a place in the final of the AFCON.

The fixture was a battle for more than a place in the final. With two traditional rivals locked in a semifinal clash, bragging rights were on the line and thanks to Gyan’s header, the Black Stars claimed it all.

Down win malaria, Gyan did not feature in Ghana’s first game versus Senegal, a fixture the Black Stars ultimately lost. Meaning, the Black Stars needed a win versus Algeria to avoid taking an early shower.

Gyan was recalled to the starting fold but the Black Stars failed to turn up for the occasion in an encounter which did not live up to its pre-match hype. However it was a situation which favoured Algeria more, as even a draw will have put them in the driving seat of Group C.

But in the final minute of the encounter, Gyan roared to life. The striker chased down a long clearance, beat former Monaco defender, Carl Medjani in a foot race and slotted the ball past M’Bholi.

With 51 goals, Gyan provided numerous frontpage moments for the Black Stars. He holds the record for the most goals (6) scored by an African at the World Cup.

However besides the goals, there was something about Gyan everyone loved to see on football’s biggest stages – his goal celebrations. They possessed the same quality as his goals.