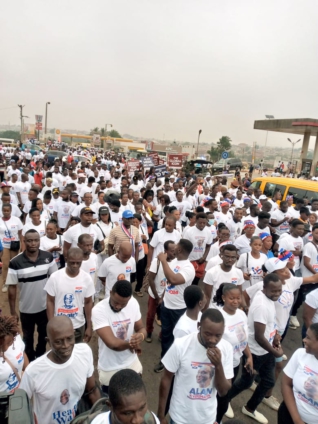 A Senior Lecturer at the University of Ghana says the massive turn out at the health walk for Alan Kyerematen is a confirmation of the people’s believe in his candidacy as the preferred flagbearer for the NPP.

Dr. Kobby Mensah, a Political Risk Analyst and Dean of the Political Science Department said the massive turnout at the walk was a clear endorsement of popularity and the kind of political energy that Mr. Kyerematen could bring to bear on the party’s campaign.

Dubbed, ‘Aduru Wo So Health Walk’, the over 200,000 people who massed the streets of Kumasi last Saturday, appears to have incurred the wrath of the leadership of NPP resulting in a lengthy communique cautioning the organizers against a repetition of the walk.

Dr. Mensah impressed at the huge numbers of people pouring their hearts out for Mr. Kyerematen at a time of political despondency in the country, was full praise for the organisers, especially, because there were no reported of incidences of violence.

“There is quite a lot of apathy in the system . People are not really getting close to politicians. So to be able to bring such numbers at a time when people are not ready to get closer to the political system , I think it was quite interesting and surprising .

“That speaks to the kind of energy some candidates are able to bring to the table”, Dr. Kobby Mensah said.

The striking turn out from the Ashanti region sent signals to other Presidential candidates of how resolute the Alan camp is in getting elected as the party’s flagbearer ahead of the 2023 internal showdown.

Several surveys within the New Patriotic Party confirmed Alan Kyerematen as the choice of the average NPP delegate with reported 194, 000 plus polling station executives all endorsing his candidature at the expense of his rivals.

DISCLAIMER: The Views, Comments, Opinions, Contributions and Statements made by Readers and Contributors on this platform do not necessarily represent the views or policy of Multimedia Group Limited.
Tags:
Alan Kyerematen
Health Walk