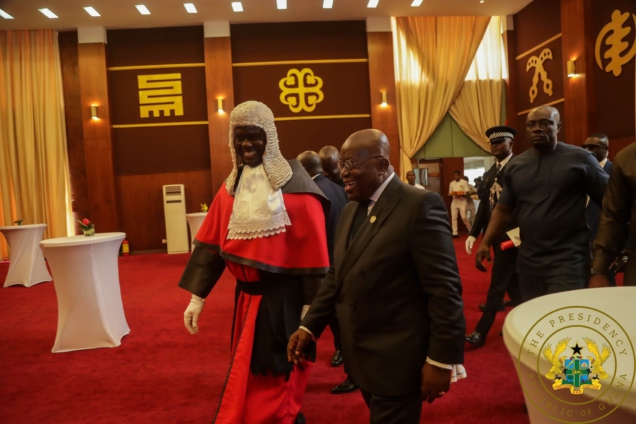 Pressure group, Alliance for Social Equity and Public Accountability (ASEPA) has commended President Akufo-Addo on his decision to investigate the Chief Justice, Kwasi Anin-Yeboah, over the $5 million bribery allegation.

“I think this is quite delightful, just as we expected the President to do. There is nothing unusual about this because the constitution is very clear about what the processes are, and the President is supposed to act as a conveyor belt when he receives such petitions.”

Akufo-Addo on Tuesday, July 27, set in motion, processes to determine whether or not the Chief Justice should be removed from office.

This follows a petition by ASEPA, demanding the removal of the Chief Justice.

In a letter dated July 12 to the Office of the President, the  Executive Director of ASEPA, Mensah Thompson, stated that the CJ is unfit to hold office.

According to him, under Article 146(6) of Ghana’s Constitution, the President, upon receipt of such a petition, must act in consultation with the Council of State to appoint a committee consisting of two Justices of the Supreme Court and three other persons who are not members of the Council of State, nor Members of Parliament, nor lawyers, to inquire into the petition and make a recommendation.

Justice Kwesi Anin-Yeboah is said to have demanded a $5million bribe to influence a case pending before the Supreme Court.

Lawyer, Akwasi Afrifa, Esq, alleged that his former client, Ogyeedom Obranu Kwesi Atta IV informed him that Chief Justice Kwesi Annin-Yeboah, “demanded a bribe of USD5,000,000 for a successful outcome of his case and that he had already paid USD500,000 to the Chief Justice.” The case under reference is OGYEEDOM OBRANU KWESI ATTA IV V GHANA TELECOMMUNICATIONS COMPANY & LANDS COMMISSION.

Meanwhile, Justice Anin-Yeboah has since denied the allegations and asked the Police CID to probe the matter.