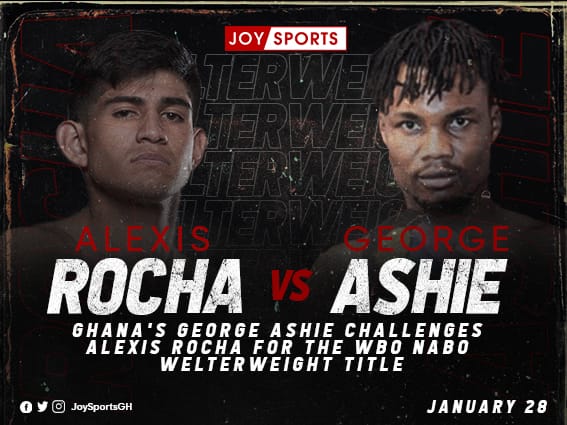 George ‘Red Tiger’ Ashie is full of certainty of his readiness for a big opportunity which has landed on his shoulder – filling in to challenge Alexis Rocha for his WBO NABO welterweight title.

The enormity of the task ahead for Ashie, who previously held another secondary IBF belt (Intercontinental Africa version) in the lightweight division last year, is that he is staging his US debut with the bout to be broadcast on DAZN for a first time. These are major milestones all boxers would want to achieve in their respective professional lives and this excites the 38-year-old Ghanaian. In his case, it’s an opportunity that has beckoned as a result of the last-minute withdrawal of the original opponent Anthony Young (24-2, 8 KOS).

Ashie who is a product of Ghana’s Mortein Professional boxing league in the early 2000s has, in addition, a tough test in Rocha who not only is defending the WBO NABO strap a second time but is also looking for major world title success. The California-based boxer has a record of 21 wins and a loss with Ashie having 33 wins, five losses and a draw making up his record.

“This is my first time in America to fight. I have been preparing for two months. Initially, I was up for a date with Adrien Broner whose original opponent had chickened out. His camp declined the fight with me.”

“But later during my intensive training Alexis Rocha who was to defend his title also had his original opponent chicken out. So I agreed to fill in because I have been preparing all this while so I am ready,” he told Joy Sports.

He also tells Joy Sports he knows the worth of the stage he is on and wants to show the people of Ghana what he is capable of.

“I need all Ghanaians to back me with their prayers. I am very grateful for this opportunity and I am patiently waiting for the day to deliver.

Between 2003 and now, George Ashie has seen some key highlights but has clearly reached the biggest of them. Three years after his debut he annexed the African Super featherweight title after defeating Taofik Bisuga at the Accra Stadium. Two years after that he had suffered his first loss at the hands of Kevin Mitchel in a Commonwealth title fight. In 2013 when he faced his compatriot Bilal Mohammed for the Commonwealth and African titles, Ashie recorded a third-round TKO.

Then came the domestic blockbuster with Emmanuel Tagoe, which had the vacant WBA International lightweight title up for grabs. The very well-patronized bout which had a grudge tag saw Ashie lose via a majority decision. Tagoe moved on to become an IBO champion in the lightweight division. The loss to the latter and the passing of his pioneering trainer Godwin Nii Dzanie Kotey a.k.a. Alloway were major setbacks which he has always fought to overcome.

His clear focus from these happenings is to step into the next phase of his career which will be recovery and winning laurels. This assignment represents a challenging period in his boxing journey since there are quite a number of crack potential opponents in the welterweight division if he wants to go all the way to the top. Rocha’s strategic positioning in the division coupled with the presence of big names including the champions Errol Spence Jnr and Terrence Crawford. The likes of Yordenis Ugas (27-5, 12 kos), Keith Thurman (30-1, 22kos) and Vergil Ortiz (19-0, 19kos) are all possible names that could be in the corridor towards the major titles.

Rocha, a southpaw will be welcoming Ashie to his base in California with the clear aim of continuing his stint with the WBO NABO title as this marks his second defence. Success in this bout gives him a big push towards the number one contender position from his current third on the latest WBO rankings. He is currently number 12 on the IBF standings a spot he has earned with his consistency in seeing off his opponents with high punch rate and ability to attack the body when the fight situations demand it.

The two boxers will feature in a media workout shortly ahead of the big one on Saturday.

DISCLAIMER: The Views, Comments, Opinions, Contributions and Statements made by Readers and Contributors on this platform do not necessarily represent the views or policy of Multimedia Group Limited.
Tags:
Alexis Rocha
George Ashie
WBO NABO