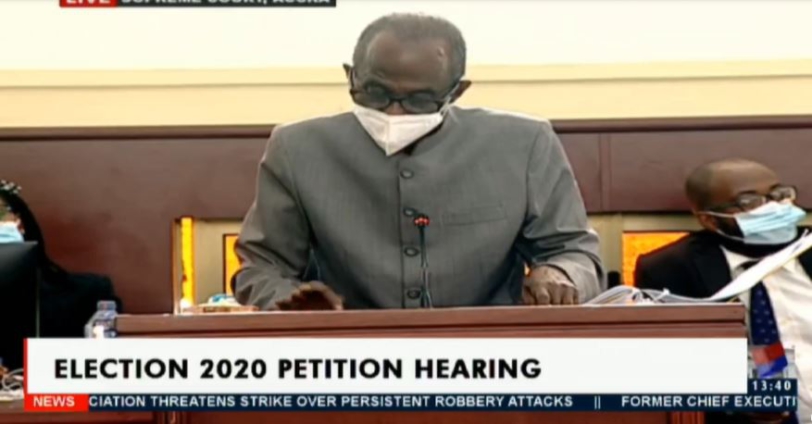 There was drama during Friday’s hearing of the NDC’s petition at the Supreme Court contesting the outcome of the 2020 general election.

The party’s General Secretary, Johnson Asiedu Nketiah took the apex court down memory lane to his days as a teacher when he employed the help of a calculator to crosscheck the Presidential results from the Eastern Region.

“I can confirm that the totals are not the aggregate of the numbers there but I don’t remember the actual figure that I got. If the court will permit me, we can add and find out what it is,” he said during his cross-examination.

Developments from here onwards would throw the court into moments of frenzy as the proceedings wore on.

“My lord it will be very difficult to cross-check the figures without a calculator, especially, when our mobile phones have also been taken away from us,” he responded to come discrepancies highlighted by the EC’s lawyer, Justin Amenuvor.

This was subsequently followed by suggestions by lawyers for the first respondent that the petitioner’s witness was aware that the EC’s results from Techiman South constituency would still leave Nana Akufo-Addo as the winner of the December polls.

The petitioner, John Mahama is, as part of his petition contending that, the EC erred in its tally of the results of the constituency figures, forming the basis for its decision to reject the total tally.

The EC’s lawyer, Justin Amenuvor insisted that the witness was aware of the results of the said constituency at the time of filing his witness statement which he believes rendered the petitioner’s analysis flawed.

This was rejected by the NDC chief scribe.

While doing the arithmetic in the witness box, the momentarily disoriented witness wondered why the device did not work as smoothly as he wanted.

His reaction to this challenge caused even elicited more humor from the gathering.

Eventually, he was successful in his computations and the hearing continued.

At another point, one of the judges had pled with Mr Nketiah to take a seat and feel convenient enough to go through the proceedings.

But he responded; “I am comfortable, I am a teacher my lord,” which caused another outburst in the court.

By close of day, the Supreme Court struck out portions of the statement submitted to it by the General Secretary.

The lead counsel for the second respondent (President Akufo-Addo), Akoto Ampaw, had argued that 10 paragraphs in Mr Asiedu Nketia’s statement should be deleted as they are “not based on the pleadings of the petitioner, unduly prejudicial and scandalous”.

DISCLAIMER: The Views, Comments, Opinions, Contributions and Statements made by Readers and Contributors on this platform do not necessarily represent the views or policy of Multimedia Group Limited.
Tags:
Asiedu Nketia
Calculator
Election Petition 2020