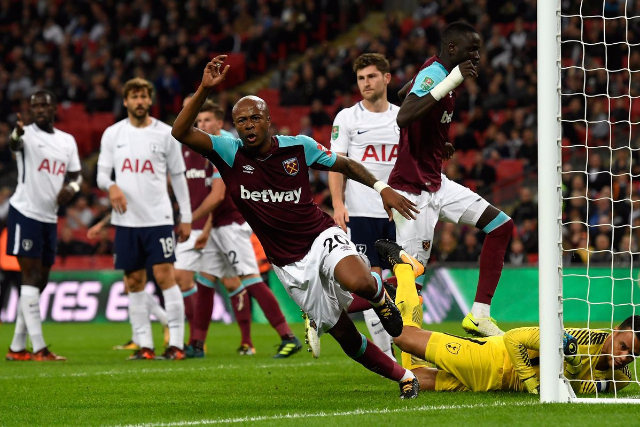 Ghana ace Andre Ayew bagged a superb brace as West Ham came from two goals down to stun in-form Tottenham Hotspurs 3-2 to reach the quarter-final of the Carabao Cup.

The Hammers seemed down and out at half-time but led by Ayew, they fought back to secure the famous victory at Wembley.

Ogbonna completed the recovery as he rose highest to flick in a corner.

Ayew was voted man of the match.

Andre's double means he has been directly involved in more goals than any other West Ham player (10 goals, five assists) since August 2016.

Ayew said after the match that West Ham's never-say-die attitude inspired them to achieve the win.

"I think the game started really tough as Tottenham took the lead after five minutes, but we stayed confident and we weren't down,” said the Sky Sports' Man of the Match. “The coach [Slaven Bilic] had the words at half-time, so I want to congratulate the whole team for what they have done today.

"It's a massive win, but we need to stay calm because we've got a massive game on Saturday. We need to enjoy this win tonight, because it's a derby and it's Tottenham and because it's always a great victory, but prepare for Saturday because it's very, very important.

"We knew if we scored a goal early in the second half, we would have a chance, but we also knew Tottenham have a big squad and great players and a great manager. Tonight, we have shown we have character and we have quality, but we need to relax and work hard because Saturday is a big one.

“Saturday is very important so we’re going to prepare, have a good rest, then work hard and hopefully we can collect the three points.”

Watch highlights of the match