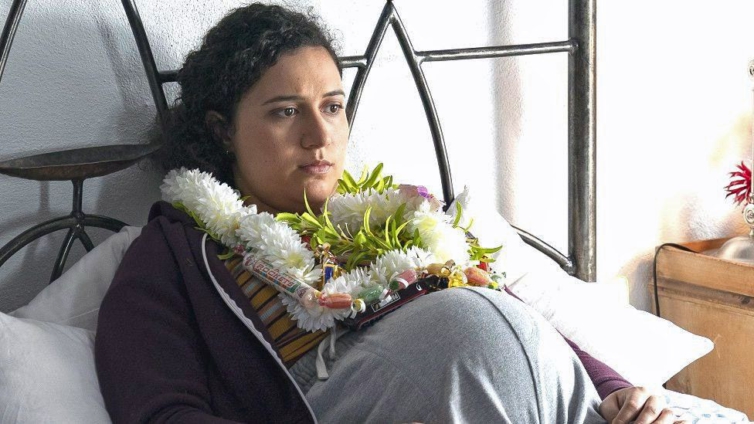 Too many mothers are feeling pressure from social media to portray themselves as perfect, according to the actress starring as an ambivalent mum-to-be in Baby Done, a hit New Zealand comedy film.

Both Zoe and her partner Tim, played by Harry Potter star Matthew Lewis, are taken aback to find she is pregnant.

But while Tim’s eager to be a dad, Zoe frets that her adventurous life has come to an end. So she draws up a bucket list to achieve before the baby arrives.

Matafeo recalls that after the film was released in New Zealand in 2020, people got in touch, confessing to sharing Zoe’s misgivings about motherhood.

“There were Twitter comments such as, ‘it’s so nice to see an actual reflection of this, it happened to me, I felt so much guilt over not having the ‘right’ feelings,’ “she says.

“We’ve got past so many constrictive gender expectations, but we’ve almost regressed in certain ways in terms of social media.

“What you put out there is what you want to be seen as and lots of people have doubled down on events like baby showers and gender reveal parties to have a picture-perfect curated form of themselves, almost like a brand.

“It’s relatively new – my mum didn’t have Instagram where she could directly compare herself with other women and thinking ‘oh no, should I be doing that?’ She muddled through with the advice of some nurse, her own mum and sisters.

“The pressures of being a mum have increased. The pressure is not only to be a good mum but to be seen as one too.”

It’s even felt by the biggest celebrities. In 2018, tennis star Serena Williams gave an interview to Time magazine where she admitted that she had felt pressure to look good on her Instagram account after giving birth to her daughter. A shot of her post-pregnancy figure was created with the help of a corset-like device.

Matafeo thinks that the battle is mental as well as seeking a physical perfection.

“Zoe feels she’s not living up to expectations of being a mother, it’s sad,” she explains.

“So many women and people who can have children feel their personalities are forgotten or erased when parenthood happens. Others can seemingly forget you were a person with a life before children and it’s quite sad that we diminish a person’s complex personality and nature as soon as they become something else. It’s along the lines of, ‘you’re a mother now, so that’s sorted, I’ve categorised you.’

“It’s a common thing for women to feel this upheaval I think. A character like Zoe is so rarely portrayed in stories about pregnancy, but a woman freaking out, not only about her life changing but about the concept that there’s actually another human growing inside her, seems completely normal to me. So, I’m glad people feel understood by a more nuanced portrayal.”

Part of the reason the story feels relatable to many is that Baby Done was conceived by the real-life partnership of director Curtis Vowell and screenwriter Sophie Henderson, from Auckland, New Zealand. Henderson describes the script as “semi-autobiographical.”

“Like Zoe, I also said that we had to live the next nine months like they were our last,” she says.

“We definitely related to that feeling of denial that comes with growing up and the fear that you might lose yourself when you become parents,” adds Vowell. “We thought that if we had these mixed feelings about parenthood, surely there were other couples feeling the same way?”

Henderson says that especially during her first pregnancy, “I did feel like I was the odd one out in the way I was feeling. Most of my friends seemed to be in the glowing, never feel sick, just really excited about it all pack, and it wasn’t until later they said, like Zoe, ‘that was me’.”

In the film, Zoe is an arborist, or a tree surgeon, as Henderson deliberately wanted to show a pregnant woman doing as physical a job as possible – and excelling.

“I think what surprised me while I was writing the Baby Done script was that I’d seen a lot of stories about the guy freaking out,” Henderson says. “I thought when it came to the woman having a problem, that surely that had been done too, but really it hadn’t.

“I found that generally, stories romanticised the process for a woman. There’s just this feeling that if a woman’s having a baby, she should simply be grateful and happy about it.”

Baby Done was filmed, Vowell and Henderson recall, when their second daughter was three months old. Both their children were often on set during the making of the movie – an experience Henderson says “I wouldn’t necessarily recommend to everyone”.

“I was only able to do that because as a writer, I didn’t have to be there every day and I had a lot of support,” Henderson says. “Pursuing your dreams and having children at the same time is hard.”

Nevertheless, the couple say that making the film was on their own bucket list of dreams, and they achieved it.

“I fear the experience might have put Rose off from having children forever though,” jokes Vowell.

Baby Done is released on digital platforms including iTunes, Amazon, Sky and Virgin from 22 January

DISCLAIMER: The Views, Comments, Opinions, Contributions and Statements made by Readers and Contributors on this platform do not necessarily represent the views or policy of Multimedia Group Limited.
Tags:
baby done
New Zealand
Rose Matafeo